This Sliding Bar can be switched on or off in theme options, and can take any widget you throw at it or even fill it with your custom HTML Code. Its perfect for grabbing the attention of your viewers. Choose between 1, 2, 3 or 4 columns, set the background color, widget divider color, activate transparency, a top border or fully disable it on desktop and mobile.
< back to blogs
Fellows' Blog: Mariisa Franz

Detroit Horse Power uniquely addresses two persistent problems facing the Motor City: the shortage of opportunities for metro Detroit’s vulnerable populations (especially children) and the abundance of vacant land. Through riding and caring for horses in a safe and enriching space, program participants learn valuable skills that set them up for future success. Our facility, built on re-purposed vacant land, will contribute to the city’s renewal and be a center for community events and equestrian services.

I connected with David Silver, founder and executive director of Detroit Horse Power (DHP), for the Challenge Detroit impact project and thought that the power of video storytelling could help raise funding and awareness for the organization.  I hope that the tools I have created for their use will help make developing a barn in Detroit a reality.  I thoroughly believe making Detroit Horse Power year-round will increase the depth of the impact they have with their students, and bringing this program to the kid’s neighborhood can positively impact communities.

Day one of the horse camp and students filed into the beautiful ringside stables. They were invited on a tour to meet the horses. Due to the cold weather and early morning start, there were some shadows beginning on the kid’s faces as they entered the day. One in particular had learned upon starting the camp that the horse she had formed a friendship with the year before had passed away.  Despite being the odd girl in the corner with a camera, the students were more than excited to be interviewed on camera.  And each student revealed immediately how much this program meant to them.  A baby bird had fallen in the middle of the arena and it was up to every kid to care for it and check on it.  The care and gentle nature of these kids as they interacted with animals revealed how the relationships formed with creatures of a different type expose open and kind hearts.

As I spoke with the kids on the final day of their week of horse camp, they mentioned their love of the horses and spouted amazing stories of all that they accomplished.  But what was between the unconditional love they had for the horses and the program, was the toolkit that DHP bestowed behind the scenes.  When leading a thousand pound animal for the first time, a power was revealed to the students, and they realized that they were mentally strong and capable and confident enough to enforce change in their own lives by extension.   The accomplishments they boasted about, how they overcame their fear, hid the nature of importance of persevering and how good it felt to do so.  They would banter over who loved the horses more, understanding the importance of energy around horses and how their emotions reflect back to them, the empathy they recognized developed the relationships they made even with each other.  Detroit Horse Power gave them these lessons, innately, showing their capacity to deal with life, control their life, by giving them a week with horses.

I am so blessed for the conversations I had with the students riding at DHP summer camp.  They gifted me a window into their growth during their time with Detroit Horse Power. 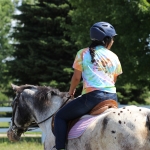 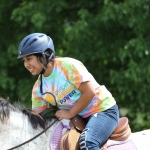 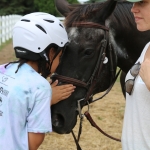 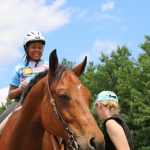 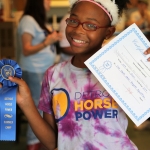 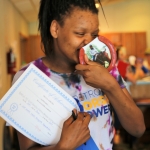