This Sliding Bar can be switched on or off in theme options, and can take any widget you throw at it or even fill it with your custom HTML Code. Its perfect for grabbing the attention of your viewers. Choose between 1, 2, 3 or 4 columns, set the background color, widget divider color, activate transparency, a top border or fully disable it on desktop and mobile.
< back to blogs
Fellows' Blog: Miranda Day

The [Power] of Perspective

Perspective is [powerful].
It can enlighten us and debunk our misconceptions, but it can also blind us and [feed] our ignorance.

In many instances today in America, being Arab, or Muslim, can be considered so [terrible] that accusing someone of belonging or being related to that ethnic group is basically equivalent to an insult. These cultural groups are laughed at for their funny accents and weird headdresses, and additionally criticized for the oppression their cultural places on women. Somehow we have managed to make being called Arab a [slur] in some parts of the world.

I took a visit to the American Moslem Society (Masjid Dearborn) in Dearborn, MI with my classmates to observe a Muslim call to prayer on a Saturday afternoon. I entered with a scarf draped around my head and I was asked to remove my shoes at the entrance. When the call to prayer started, men and boys stood shoulder to shoulder, bowing, and kneeling in rhythmic waves. Not a single woman was present.

Gathered in a room with our host, Mosad, after the call the prayer, he explained that the men and women are separated at the mosque to eliminate distraction during the call to prayer. He went on to explain that the Qur’an says “men must lower their [gazes], and woman cover their [charms]”. In some cases, devout Muslim men might actually avoid eye contact with a another woman, even if he is in conversation with her, as a sign of respect to her. In my culture, we might consider it rude to not look someone in the eye during conversation.

After our visit to the mosque we attended the Arab American National Museum, also in Dearborn. Here, many of my preconceived assumptions were busted. One of our docents, name Miriam, provided first-hand knowledge about the headdress called the ‘hijab’ and even spoke on behalf of the more concealing veil worn in other countries called a ‘burqa’. Miriam revealed that the Qur’an does not require that Muslim women wear a headdress, that rather it simply asks “women to cover their charms” as Mosad had mentioned at the mosque. This saying is open to interpretation by different cultures, families, and individuals. Conservative action is the minimal expectation, that women wear modest clothing and refrain from sexual contact with the opposite sex. Miriam herself was Palestinian Muslim who chose not wear the headdress.

Miriam also told me that contrary to popular belief, the headdress is actually symbolic of woman empowerment. “Think about the way the hijab frames a woman’s face. She is still beautiful in showing off her face, but most importantly her forehead is exposed where her brilliant thoughts are rendered and released. The hijab emphasizes a woman’s mind.” Amber Regman wrote in her blog titled My Hijab Doesn’t Oppress Me, It Empowers Me , “The veil in Islam was encouraged to elevate women to a symbol of a respect”. I told Miriam that I was led to believe that the headdress was a way of covering women and suppressing them of their beauty and freedom of appearance. I was ashamed of this assumption, but enlightened by our conversation.

In response to my expression of ignorance and feeling guilty for it, Miriam responded that some Muslims have their own view of Americans too. The United States is characterized by its independence and individuality so much in fact that Muslims often consider the people of the U.S. as isolated from their families and consumed by materialistic assets and sex. God and family are highly respected to Muslims. Author Fred Jandt writes in one his textbook: “The dividing line between the Arab and Western worlds is religion. Islam is a religion, but also a way of life and the central force of Arab existence” (An Introduction to Intercultural Communication). 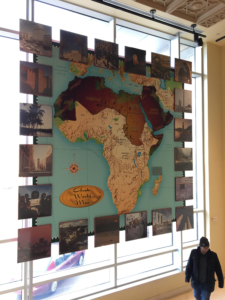 This is a map of Arab countries. Bet you didn’t know Iran is not an Arab nation.

As I left the Arab American National Museum with Miriam, we talked about our personal lives, our husbands, and our desire to have children. Immediately following, we discussed the cultural shelteredness that plagues America and how it will be our responsibility to expose our children to various cultural opportunities so that they will not succumb to institutional ignorance, micro-aggression, and/or racism like we may have tricked in to believing or expressing ourselves.

I am thankful for my Alma Mater, the University of Detroit Mercy, for providing welcoming grounds for cultural diversity and intercultural relations during my higher education. I am proud to know that Metro Detroit is home to various ethnic groups: Detroit today remains predominately African American; the city of Dearborn has the largest concentration of Arab Americans; and religious groups in the metropolitan area include Christianity, Islam, Judaism, Hinduism, Buddhism and others. We are not a perfectly balanced melting pot by any means, but I am proud to know that cultures different from my own can find refuge in and around the same place that I was able to.

I am thankful for my fellowship [Challenge Detroit], my host company [EcoWorks], my school [UDM], my city [Detroit], my neighborhood [Lafayette Park], and even my in-laws [The Days] are contributing to the ways in which I can live, lead, give, work, and play in intercultural communities. #ChallengeDetroit #Live #Lead #Give #Work #Play #Explore #Communicate #ChallengeAssumption #GetExposed