This Sliding Bar can be switched on or off in theme options, and can take any widget you throw at it or even fill it with your custom HTML Code. Its perfect for grabbing the attention of your viewers. Choose between 1, 2, 3 or 4 columns, set the background color, widget divider color, activate transparency, a top border or fully disable it on desktop and mobile.
< back to blogs
Fellows' Blog: Maryann Palazzolo

There’s a joyful view in my backyard, a colorful mural that reads “WAKE UP START DREAMING”. This kind of street art is more than a  cool backdrop for Instagram photos. It’s more than a trend. It’s more than a trade-off for the inconvenient potholes in my backyard alley way. Part of a series by MANTRACITY, this mural is a project of Detroit Lives! founder Philip Lauri. MANTRACITY was inspired by Steven Power’s A Love Letter for You, a street art project that paints murals with positive messages in an effort to inspire and instill pride among community members. And for me, the mural offers a reprieve from the ordinary urban landscape surrounding my home.

In a similar interest, my friends from Asheville recently visited Detroit to paint a wall for the first ever Better Block part of the Detroit Design Festival. The DDF is a crowd-sourced festival that celebrates creators and designers by showcasing their works of expression for the public. The DDF does a really great job at cultivating collaboration and innovation through art and space. After all, creating and innovating run generations deep here. The DDF illuminates these  assets of Detroit (innovation and creation).  The potential in Detroit is enormous. Trevor and Dustin felt it. Those of us who live here feel it. It is evident from the scope of work showcased at DDF that Detroit has the assets  and inspiration capitalize on for a brighter future. Building upon the creative sector alone, the value of Detroit’s social capital is going to (and already has begun to) grow at a fast rate. Simplified, social capital is improved through initiatives (like DDF & Better Block) that invite everyone to participate, foster collaboration, welcome diversity, and stress the collective goal. If Detroit’s innovation and creation has been used  as a way to improve social and economic conditions in the past, it certainty has the potential to do so again. 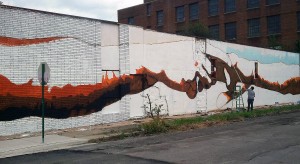 Better Block’s initiative, in sync with Dustin’s, is to make the world a better place through public art. Dustin Spagnola‘s iconic paintings can be seen on streets throughout the nation (most of his work can be seen on walls throughout Asheville). From political scenes to pop culture depictions to cultural themes, Dustin’s work is often thought provoking and certainly beautifully crafted. What does this painting signify to you? How does it connect to Detroit? To you? What does it make you feel?

These questions provide an opportunity to explore the myriad of public interests that converge in communities. We are living in a time when socio-economic conditions degrade quality of life, highlight the gap of inequality, and de-humanize citizens.  To combat the deepening urban divide, it’s imperative that we use public spaces as a unifying space. A community is born out of participatory collaboration. Thus, a community is enriched when citizens, in spite of differences, act upon a shared feeling {of pride.} If we build upon what we love about Detroit, it becomes much easier to feel a unifying identity in our neighborhoods. Just as there can be many different interpretations of Dustin’s mural, there are many opinions on how to reach a goal. In both cases, no one is right or wrong in their view- just different. Art in public spaces offer a reprieve from urban degradation, because it encourages people’s participation even when differences are apparent.

That’s why I think Dustin’s mural is meaningful and relevant for Detroit. For me, it narrates a shared story of Detroit. One we tend to forget. The story of how diversity and creative collaboration made this city. The story of how collaboration will save this city. It’s an image that reminds us that we are in this together. In the complex and often isolating nature of urban life, we need to reach out to each other, invite participation, and empower communities to create their own solutions. Street art is sharing, and I believe we owe it to each other to share. Share our inspiration, creations, talents, ideas, and success. We have so much to learn from each other… and we have a lot of work to do. 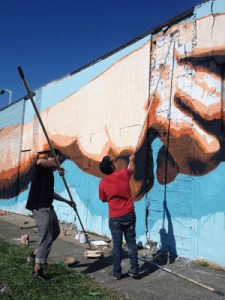 While there are still people who de-value Detroit, it’s a sign of prosperity (as well as an honor) that young, creative minds want to invest their talents in Detroit. Dustin and Trevor experienced Detroit in a way different than most visitors. Typically, I’d take visitors to see the popular spots in Detroit (the Heidleberg Project, Cafe D’mango, the Riverwalk, DIA), but our combined busy schedules left little time for exploration. Instead, without me as their tour guide, they engaged with the city for an authentic, unscripted experience. Everyday, they beautified the corner of Grand Blvd & St. Antoine and everyday, they went to Woodbridge Pub. And everyday, they met new people, many of which they saw again over the course of their visit. And everyday, people driving by while they painted stopped their cars to chat- asking questions and showing support. Some people stayed to hang out or watch. One boy even lent a helping hand in the painting process.  It should be noted that Grand Blvd & St. Antoine is not a heavily trafficked area. These interactions simply do not happen… but it’ll happen more often now. Thanks, y’all! 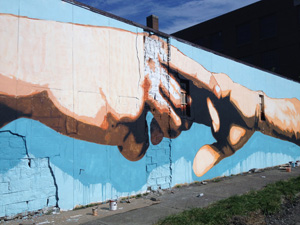