This Sliding Bar can be switched on or off in theme options, and can take any widget you throw at it or even fill it with your custom HTML Code. Its perfect for grabbing the attention of your viewers. Choose between 1, 2, 3 or 4 columns, set the background color, widget divider color, activate transparency, a top border or fully disable it on desktop and mobile.
< back to blogs
Fellows' Blog: Kendra Ollis

At the beginning of the Challenge Detroit program, we were told that we would have an Independent Impact Project working with a nonprofit of our choice and I knew then that I would work with Motor City Scholars (MCS). Being a part of MCS from the ground up have truly been a great learning experience. Understanding what it takes to start an organization and being equipped to keep it going has been another impactful experience. But since MCS was so new, there were some areas that we wanted to focus on to improve for the future. Those “struggle areas” were what I decided to focus on for my Impact Project.

After a strategic meeting, we concluded that two of our most important focus areas were our volunteers and donors and how we can recruit and retain them. 100% of the how our organization is run is based on volunteer participation so we needed to create a strategy that works best for us on recruiting and retaining future volunteers. Our volunteers serve as mentors and coaches to students and while we previously leveraged our personal networks to recruit, we needed to expand our search. As far as donors, we knew that the funding for the programs were out of pocket for the staff and we wanted to develop a plan on different resources we could use for fundraising/funding and attracting future donors to give to the organization. In essence, we needed to ask ourselves, “What is our ideal volunteer/donor and how do we keep them engaged?”

Through various community interviews, I spoke with volunteer coordinators and development directors with organizations all over the city. I learned some of the practices that worked and didn’t work for them as well as being exposed to some resources that we could implement within our organization. What I learned the most was that MCS was already on the right path in both areas. Some of the methods that we were currently implementing were those that my interviews had suggested and praised that we were already doing for such a new organization. This was very inspiring to me because most of the organizations that I spoke with had been around for 30+ years. To hear that we were on the right path with some of our practice from organizations that have been doing recruitment and retention for years was amazing!

I really enjoyed being able to create connections with those in the community in the youth development/education sector and getting great feedback for MCS. The project prompted me to think more about the future of the organization and my future with the organization. I met with individuals that were passionate about the work they do and willing to work and inspire those who were passionate as well. Just as working on this project has allowed me to create plans for our organization to grow, it also allowed me to create connections and network with those in the industry that can not only serve as a mentor for me but for the future of Motor City Scholars as well. 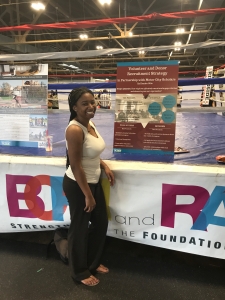