Tell us about one of your favorite neighborhoods in Detroit and what makes it unique? 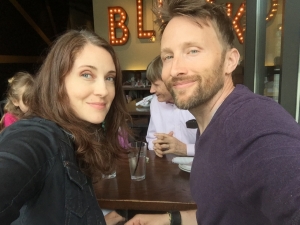 In 2016, we packed up our life and moved back to Detroit from Los Angeles. Darcie and I had been feeling increasingly called to move back, so we took a leap of faith with our two daughters.  I had grown up in the suburbs, at 13 Mile and Southfield, and had always loved spending time in the city, mostly downtown and Southwest. Knowing that one of our deepest longings was to live in closer context with neighbors and that our girls would be raised in a diverse community, both socio-economically and racially, friend after friend kept pointing us towards the 48214 zip code and the Mack Avenue Church community (www.mackave.com).  For about 8 months, we rented an apartment in Pingree Park and worked jobs with Lyft, The New Teacher Project, and Citizen Detroit. And then in May of 2017, we were able to buy a home for our family of four, just a block away.  We have been blown away by the kindness and intentionality of our neighbors, both from within and outside of the church. Sitting on our porch swing, walking to the park, clearing out overgrowth in alleys, and even having to get up early to shovel snow has provided a tapestry of invaluable moments connecting to families and people who’ve lived here for decades. MACC Development, the CDC of our church, has just opened The Commons, the first laundromat/coffeeshop/tutoring/community gathering space at the corner of Van Dyke and Mack. It’s only been open for two weeks, but already I’ve caught conversations about the pros and cons of charter and public schools; a hearty Kendrick vs. Tupac debate; and a sustained celebration of the new Black Panther movie. All over the low buzz of laundry and espresso machines doin’ their thing.

Tell us about the challenge project you’re currently working on, what are you learning from
the experience? 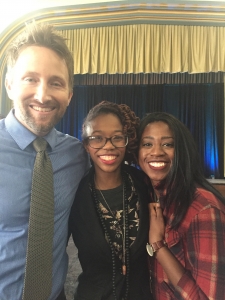 Currently, my team and I are working with the Detroit Land Bank Authority to help them streamline the process of selling vacant lots to community partners and non-profits. We have interviewed about a dozen representatives from churches and service agencies looking to buy adjacent land for community gardens, outdoor performance spaces, and other projects they hope will bless their neighborhoods. The process of buying any property can be daunting and intimidating, but the mission of the DLBA is to see lots purchased and re-activated by Detroiters as soon as possible. I’ve learned that there is some confusion between the function of the DLBA and that of the Wayne County Treasurer, the entity involved in foreclosing and auctioning homes, too often starting a process that evicts people from homes they’ve lived in most of their lives. It is also clear to me, that if not done with ample care for these long-term residents who have challenging financial situations, the Land Bank’s urgent mission to deplete their property holdings as soon as possible will tip the balance of ownership towards those with the most ability to pay quickly. Thus, the Land Bank must proceed thoughtfully and attentively if they are to ensure that Detroit remains a city that is truly for everyone, and not just people like myself who had the means to move back from Los Angeles and purchase a home.

Tell us about your host company and your role in the organization. 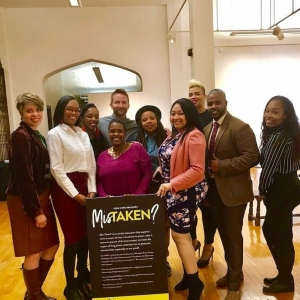 At my host company Teen HYPE, I serve as the Manager of Mission Advancement. Teen HYPE’s mission is to Celebrate Youth, Confront Barriers, and Build Bridges, and they do this in a variety of ways. Each year, the organization produces a stage production that shines a light on a particular aspect of being a teenager growing up in the Detroit of today, so the play is written in large part by the students themselves. This year, our topic is the negative impact of a long prison sentence on the families of the incarcerated, particular the kids. With my experience having served at the Prison Creative Arts Project at the University of Michigan, I was brought on board to help develop the curriculum and plan some events. We had learned that about 90% of the teens that make up the leadership of Teen HYPE are experiencing a parent or close family member either in prison or currently on parole. Where I grew up, just north of 8 Mile, this is definitely not the reality. So, we watched Ava DuVerney’s documentary The 13th, exposing the massive expansion of private, for-profit prisons in our country, and the troubling reality that slavery might be operating under a different disguise. We pondered the ideas of over-incarceration and over-policing of some communities. Ultimately, we asked: what are the emotional, social, and economic impacts on the kids who have to live in the reality of having a caretaker taken away? We invited students and people who are currently incarcerated to submit artwork for a gallery and community conversation and this ultimately led to our stage production called Mis-Taken?, performed 5 times in early March of 2018 to roughly 4,000 student and community members. The response was overwhelmingly positive.

What kind of impact do you hope to have with your host company and within the city?

Teen HYPE is doing critical work. I hope that while I’m here I can do my part to get the story out to both Detroit as well as the suburbs. I know full well how suburban folks often misunderstand my neighbors in the city, how that trickles down to expecting the worst from our local teenagers. These misunderstandings lead to ill-informed assumptions and continued disconnect, and this nudges people into making both political and everyday choices that continue to damage communities outside of downtown. I am living a very different reality, seeing every day how resilient and brilliant our teenagers are, how they have hopes and dreams and ideas that could truly move Detroit towards becoming the kind of city that sets an example for the rest of the country. I will continue to build bridges towards new perspectives and possibilities.

What are you most looking forward to during springtime in Detroit?

This will be the first spring in our new home in Pingree Park, so I’m excited to start planting vegetables in our backyard garden, to finish fixing our porches, and to start having neighbors and friends over. I am also looking forward to cheaper gas bills, as it’s been a really long and cold winter!

How do you believe your fellowship will shape your career moving forward?
Challenge Detroit has provided me with a range of Detroit perspectives on business, politics, development and community activism. Just over halfway through this fellowship, I am grateful for the stories and lessons I’m learning. I will continue to work on The Table Setters, the non-profit that Marvin Wadlow Jr. and I officially launched in 2016 to produce improved relationships across humanly created racial, socio-economic, political, and religious lines. We combine launch events in churches, schools, businesses, and civic institutions with customized plans for ongoing cultural accountability. We’ve seen that diversity training days are never enough, but that ongoing relationships that nurture connections and share brokenness, hopes and dreams, can be mutually healing and productive. Challenge Detroit has revealed to me, time and time again, how very true and critically urgent this is, what with the rancorous divisions in our city and country. I also sense that I will reconsider my call to ordained ministry, as this Fellowship has required me to take a significant break from my coursework at Fuller Seminary. I sense a growing call to community development, to continue learning how to really listen to people, story by story, and discern how to rebuild, or many times, build for the first time, trust between neighbors and neighborhoods in Detroit and the surrounding suburbs.

For more about Matthew’s life living, working, playing, giving, and leading in Detroit check out his spotlight video!