This Sliding Bar can be switched on or off in theme options, and can take any widget you throw at it or even fill it with your custom HTML Code. Its perfect for grabbing the attention of your viewers. Choose between 1, 2, 3 or 4 columns, set the background color, widget divider color, activate transparency, a top border or fully disable it on desktop and mobile.
< back to blogs
Fellows' Blog: Kyla Carlsen

Since we cannot change reality, let us change the eyes which see reality – Nikos Kazantzakis

As some of you know I relocated to Detroit this past Spring from Chicago, where I’ve spent the majority of my post-college career (and for anyone who doesn’t know, watch my quick video).

Like many others, I entered the city excited but hesitant, not quite sure what to expect. After only 2 brief trips prior to the move, I had mixed feelings about this major transition. Leaving behind the 3rd largest city in the US, what will Detroit have to offer? After living in a cultural mecca like Chicago, what will I do for fun in Detroit? With roughly a quarter of the population size, who will become my friends? What will the people be like? Moving just 2 years after Detroit became the largest municipal in history to file for bankruptcy, how will I find a job? Where will I work?

During one of our house-hunting trips I was lucky enough to hear about Challenge Detroit through a former colleague. As a quick reminder for those of you who are too busy to browse the website, Challenge Detroit is a year-long fellowship designed to attract and retain talented leaders to Detroit in an effort to develop and revitalize the city’s core. Roughly 30 fellows per year from vastly diverse locations and backgrounds, will work 4 days a week with varying host companies in a full time position, and on the 5th day come together to work on a social impact project in partnership with a local non-profit.

(Hopefully Deirdre, our program director, is reading this with her approving smile nod; did I nail the elevator pitch?) It’s worth noting that Deirdre recently received the 2015 Vanguard Award which recognizes individuals who influence the growth, prosperity, and quality of life in Metro Detroit.

The program focuses on 5 key pillars, through which I found the answers to my questions:

Live–I reside in a small but significant neighborhood known as Brush Park. Nestled just in between Downtown and Midtown along the main Woodward corridor, (two of the most developed and publicized neighborhoods in Detroit) my streets feel safe yet are peppered with blighted homes and a constant reminder of the economic disparity within my new city.

When we first moved in, I typically told people I lived in Midtown (not too much of a stretch given we’re within just a few blocks of the Wayne State campus) because it was more recognizable, and I wasn’t sure yet how my neighborhood would be perceived. Let me add a bit of context by reiterating that most of my friends and family have never been to Detroit and know only the way the city has been portrayed in the media. Those familiar with Michigan were possibly more astounded after witnessing an iconic American city fall so far. To say the least, I was met with surprise and skepticism when communicating the decision to move here.

However since moving in 6 months ago, the new M1 rail is being constructed just outside my building’s front door, there is a monstrous new Red Wings stadium being developed just across the street (for any Philly readers out there, it’s been likened to Xfinity Live), Dan Gilbert (the biggest private owner of office space in Downtown Detroit) purchased the vacant lots next door and behind my building and announced a significant and much needed housing development, and Nicole Curtis of “Rehab Addict” on HGTV began renovations on The Ransom Gillis mansion, just a few blocks away. In less than 6 months of being a Detroit resident, my perception of my own neighborhood changed from cautiously reserved to confidently proud. 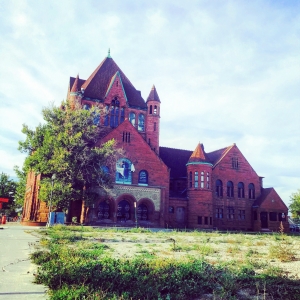 We read the Wall Street Journal and BusinessWeek #1 Bestseller Strengths Finder, and learned about our 5 core strengths, and how to work with each other’s competencies. (For anyone wondering or looking for a laugh, my 5 strengths in order are: Achiever, Competition, Intellection, Focus, and Input i.e. collector. Surprising?)

We spent a morning doing improv, playing games and singing in the middle of a circle (to my more intimate crowd, yes I participated, featuring Billy Jean). While I can’t think of many situations where I’ve felt more uncomfortable, this was one of my favorite days and was excellent team-building in preparation for the presentations we had to give that afternoon. It’s no surprise Forbes hails improv as a great tool for business training.

Aside from the fellowship activities, there are a number of community workshops and discussions available, many for free. Perhaps this exists in other cities, but after living in the New York, Philadelphia, and Chicago areas, I’ve never experienced this type of engagement so readily accessible. Just this past month I’ve attended a #Lean In panel discussion through Detroit Young Professionals and a community workshop on Building an Equitable Workforce, Increasing Access and Removing Barriers to Growing Industries, hosted by Detroit Future City as part of their Ideas for Innovation series. The degree of conscientious activism in Detroit is overwhelmingly inspirational. As an outsider, my impression is residents are hopeful yet realistic. But most importantly the culture of caring and owning while openly discussing the city’s issues is truly unique. Though far from a perfect landscape, no other city I’ve lived in has been as transparent about race and gentrification. So transparent that organizations like Michigan Roundtable host public forums on the topic. Discussions are only a start but still a novelty for me.

Work–My host company is Brooks Kushman, one of the largest intellectual property law firms in the region. Located in Southfield, I commute approximately 25 minutes to and from work each day. Fortunately I’m often driving against the traffic of suburbanites commuting into the city for work. But people often ask me what the biggest transition was moving here. Undoubtedly transportation. In Chicago, I lived less than a block off the red line which I rode for approximately 11 minutes to the loop and walked 1.5 blocks to my office. My commute was 15-18 minutes from my door to my desk. Getting used to driving not only to work, but pretty much everywhere has been the biggest transition for me.

As Marketing Coordinator with Brooks Kushman, some of my responsibilities include managing the firms social media and website, assisting with event planning and community outreach, and conducting marketing research to develop new events and initiatives. While thankful for my career experience, I’m excited for the opportunity to work in a new field after spending the past 5 years in financial services and thrilled to be doing something more creative and related to my college degree. 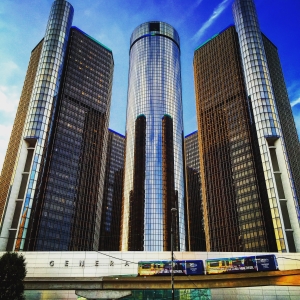 Play–Even prior to starting the program, I made it a point to try as many new bars and restaurants as possible as soon as we moved. We found that Detroit actually has a thriving culinary scene; there is constantly something new opening up, and there is a wide array of establishments for every crowd to fit any mood from big city foodie to quirky hipster to neighborhood local favorites. The biggest challenge for me was finding them. Luckily we have fantastic life-long Detroit neighbors who were instrumental in helping us discover all the city has to offer.

Now that I’m exposed to even more resources, there is no shortage of events to fill my calendar. From happy hours on Rosetti’s rooftop and Tiger’s games with the program, to festivals like Jazz Fest or Eastern Market After Dark, to weekly trivia nights or 3rd street Thursdays with fellow fellows, I’m struggling to get my deeply coveted 8 hours of rest.

Give–Much like extra-curricular activities, there’s no shortage of non-profit organizations in Detroit either. With so many passionate groups tackling real issues facing the city, my biggest struggle has been choosing just one to devote my time to.

During Challenge Detroit boot camp we weeded for the Michigan urban farming initiative, and I discovered a community farm right down my street that I did not previously know existed. We also toured some non-profits the program has partnered with in the past and learned about prior projects including:

Perhaps most exciting, we’ve started our first Challenge project working with the City of Detroit Mayor’s office to develop a Neighborhood Business Directory which will not only help the growth of small businesses by promoting awareness and marketing but will also help retell the story of Detroit through the eyes of the residents. 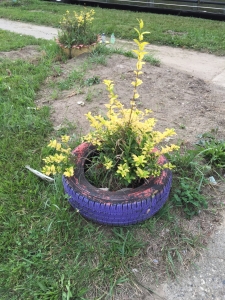 Living in Detroit is hard to capture through words or descriptions, particularly for people who aren’t here. Perhaps like any other city, you don’t really understand it until you’re living and breathing it. Now I’m by no means trying to paint a picture of perfection (if it were then I wouldn’t have the opportunity to participate in this amazing program!) But I am suggesting the issues that outsiders perceive are not necessarily accurate. That Detroit has a lot to offer, including a diverse culture, a thriving entrepreneurial community with endless development resources, and one of the nation’s largest theatre districts. That the people are warm and inclusive, and passionate but realistic about change and growth. And that post-bankruptcy, I believe there is far more opportunity for me to succeed and make a difference here than in any other city.

Last Saturday, I walked from Brush Park to Dequindre Cut to volunteer for the Detroit Design Festival (for anyone not familiar with the area, this was roughly a 45 minute walk or 2.5 miles, one-way). I spent the morning helping set up the youth day arts and crafts tent and passing out pamphlets to residents and visitors to promote awareness about the events and exhibits. On my walk home, I stopped at Eastern Market to pick up Michigan-grown produce and fresh meat from the butcher shop to cook dinner. And just now, after six months I’m actually starting to feel like a resident. But at the same time, since starting the program I’m always learning new things about Detroit and my perceptions are constantly evolving.

Each day I feel like I see the city through new eyes. I hope you will continue on this journey with me of learning, growing and challenging so you too can discover the city from a new perspective. My goal is to use this blog as a tool to stay connected with friends, family and colleagues during this exciting next chapter. I promise they won’t all be this long, so check back monthly for updates! 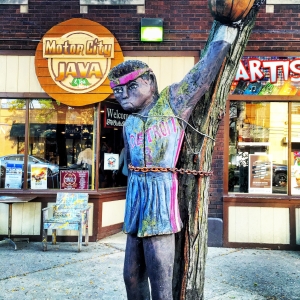