As we reflect back on ten-years of impact, we caught up with two alumni from our inaugural program year, Cornetta Lane and Ben Hershey. Cornetta is now focusing her work on helping Black, Brown, and Indigenous storytellers develop films that shift harmful narratives about Detroit, and Ben recently joined the ranks at Google. Learn more about how Challenge Detroit impacted their lives beginning a decade ago.

You were a Challenge Detroit Fellow ten years ago in our inaugural year, please share a highlight of your fellowship year.

BEN: The highlight of my fellowship year was, without a doubt, the wonderful people that I met in Detroit. Moving to a new city after being at college with all my best friends felt like it was going to be isolating. In many ways, I felt like I was making a mistake by leaving my old life behind!

As it turned out, joining Challenge Detroit gave me an instant network of friends with similar interests that were ready to have fun and explore a new city. Many of my favorite memories from the inaugural year all involve new friends, new experiences, and new kinds of food (I still miss Bucharest and Z’s Villa).

One particularly fond memory though, is how my CD experience started. I was not selected as one of the thirty finalists, despite having some catastrophic interviews that I was highly unqualified for. I did however end up coming to an agreement on a six month trial run as the program’s videographer! I had no practical video production experience, but I thought it was worth a try for six months to see what I could make of it. 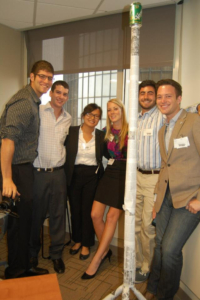 Ben holding a camera at one of the challenge project days

Upon arrival in Detroit, I found out that one of the thirty finalists had accepted another job opportunity, so their spot was open for me to fill. This goes to show that you never know where an opportunity will lead to until you explore it to its furthest potential. Had I not taken that six month contract position, my life would have taken a different route entirely.

CORNETTA: WOW! I can’t believe it’s been TEN years since the start of the Challenge Detroit fellowship! I remember being a wide-eyed, fresh out of City Year young woman looking for an opportunity to do more good work in my city. The application required a video submission, and I wanted to demonstrate my, um, poetic chops. Eventually, I was invited to the interview round. I was offered a marketing position at United Way for Southeastern Michigan and gladly accepted. The first week on the job, we worked on a Ford Motor Company-sponsored fundraising campaign. My slogan “Ford Focuses on Making Greater Detroit Greater” was selected to be featured on the exterior wall of the main office building in Dearborn. I was so proud of that early win and always point to that experience as a confidence builder. Since then, I’ve been relentless in my creative pursuits inside and outside of work.

Ben, share about your job while in the program and your current role at Google. How did Challenge Detroit help you get to where you are today?

BEN: As I mentioned above, I had a bit of a unique role within the fellowship program. My job was primarily to document the inaugural year through video and photo, while also working at the host company HiredMyWay.com. In both of these roles I was filming, editing, and animating videos for various online uses. The constant pace of work allowed me to build my skills in video, animation, and photography rather quickly. 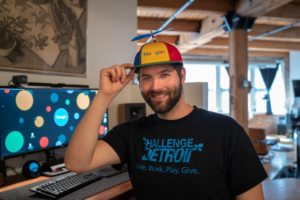 Fast forward ten years and I find myself at Google, where I am a Project Lead for the Multimedia vertical within the Google Ads space. I oversee the production of multimedia content in forty five languages across thousands of help center articles. It is a fast paced and multi-faceted role that allows me to dive into a lot of different areas on a day-to-day basis. I manage two teams (graphics and video) across five time zones, and personally work to design and implement production strategies to more efficiently create content at scale. All the while, the main focus of my program is to make complex concepts more understandable and accessible through the use of multimedia assets.

My work at Challenge Detroit helped me get to where I am today by laying a foundation for essential multimedia skills that I use every day. While I am no longer in the trenches doing production, the skills that I learned that year help me to understand how things get made on a granular level. Knowing the process of how to create something is the first step in figuring out how to create it more efficiently, which is the core of my job.

Cornetta, making an impact in the community is part of who you are. Talk about your commitment to the city, especially as a Detroiter, and what participating in the program has meant to you. 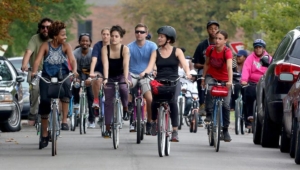 CORNETTA: Challenge Detroit introduced me to the idea of collective impact. When a group of like-minded folk tackles an issue, things can change for the better. I think back to our monthly challenges and find pride in what we offered/created for our partners. Now that I am a mom, I’m constantly thinking about system-level issues that impact our daily lives. I contemplate questions about the quality of schools, accessibility to healthy food and clean water, affordable housing, flooding, other environmental issues, and reimagined safety. I envision a Detroit that centers the basic needs of its residents. Therefore, I’m committed to participating in neighborhood meetings, voting and encouraging folks to vote, standing in solidarity with residents most impacted by these systemic issues. We owe it to ourselves and future generations. And we can only see change through collective effort.

How has Challenge Detroit impacted your life?

BEN: Joining Challenge Detroit was the single most impactful life decision that I have made, period. I don’t say that to mean that the fellowship was perfect, or that joining this program will immediately and irrevocably change your life. Rather, it gives you an opportunity to meet people and work on things that could change your life if you choose to see the bigger picture and take advantage of what is in front of you.

Almost every aspect of my life stems from one or two decisions that I made at the beginning of my career. For me, the work that I did in Challenge Detroit started me on a career path that I had no intention or interest in doing prior to joining the program. Without the opportunity to learn and grow during the fellowship, I would not have chosen multimedia as a career path, and would most definitely not be working in my current role at Google. 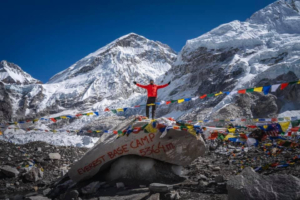 Ben at Everest Base Camp in late 2019

In addition to the friendships that I made during the inaugural year, I also made a lot of professional connections through my host company, and the program leaders. These introductions allowed me to transition my experience from my fellowship year, into a video production startup in my second year in Detroit. This proved to be one of the most important financial decisions I made in my twenties, as I was able to leverage my startup to provide full time income in 2013, before transitioning to part-time work in 2014. Seven and a half years later, I am still getting freelance client work from people I met in Detroit a decade ago.

The impact that this has made on my life cannot be overstated. Freelancing part-time allowed me to achieve financial security early on in my twenties, which gave me the freedom to buy property, and chase my passion of travel and adventure. To date, I have visited over forty countries, and hiked across many of the world’s greatest landscapes. Without the connections and skills that I acquired through Challenge Detroit, none of this would have been possible. 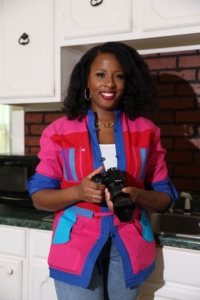 Cornetta readies for another storytelling experience

CORNETTA: Challenge Detroit was the launching pad for my professional career. At United Way as a Challenge Detroit Fellow, I learned the value of creating and sharing impactful stories to support an organization’s mission. After United Way, I learned how to use impactful stories to uplift communities (I launched a few community storytelling initiatives, including Pedal to Porch and Dinner for 30). Now, as co-director of Detroit Narrative Agency (DNA), I am helping Black, Brown, and Indigenous storytellers develop films that shift harmful narratives about Detroit. I love my journey and am grateful for a solid beginning.

What does a decade of impact in the city for Challenge Detroit mean to you?

BEN: The Detroit of today is unrecognizable as the Detroit I knew in 2012. (Downtown especially!) There has been so much interest, investment, and development in the city in the past ten years. Much of that newfound enthusiasm is due to the work of programs like Challenge Detroit.

To date, I don’t think I’ve seen an urban area that has as many grassroots volunteer organizations, quirky events, and caring citizens as Detroit. I’m overjoyed that people have found the same passion that I did ten years ago by making an impact in one of America’s most significant cities.

A decade of intentional impact of living, working, playing, and giving in Detroit has led to an amazing outcome. It is a result that we should all be proud of, but itis still the beginning in many ways. I look forward to seeing what Challenge Detroit will accomplish in the next ten years!

CORNETTA: A decade of impact in the city of Detroit shows a commitment to the city. It’s one of earth’s true gems. I’m not going anywhere anytime soon.