This Sliding Bar can be switched on or off in theme options, and can take any widget you throw at it or even fill it with your custom HTML Code. Its perfect for grabbing the attention of your viewers. Choose between 1, 2, 3 or 4 columns, set the background color, widget divider color, activate transparency, a top border or fully disable it on desktop and mobile.
< back to blogs
Fellows' Blog: Annie Gough

Setting a Place at the Table for Art 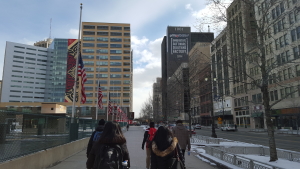 Being able to enter into a space of higher education from an outside yet still welcome lens is something I am truly grateful for, particularly when that space is Marygrove College in Northwest Detroit. The small liberal arts college rests in a well-maintained campus of historic stone buildings with layers of artful detail. I appreciate that Marygrove continually opens its doors to the community for events such as the lecture given by historian Karen R. Miller I wrote about in October, as well as the panel I attended this month titled Creative Vitality = Healthy Neighborhood? .

The panel consisted of several educators and members of the community, all with a very unique and impressive background to inform their opinion of how the arts should and do exist in a community.  Honestly, all of them were extremely bright, had insightful comments to contribute, and I would’ve happily sat and listened to an hour-long lecture conducted by any of them. And while they all agreed on many of their stances, they agreed but with different experiences and philosophies to support their more specific angle.

Rather than summarize the panel, which would not do it justice, I would like to relate the topic to the current project we’re working on, while including some insightful quotes from the panelists.

“The arts owe us nothing. What is it, then, we have a responsibility for? Citizens.” Michael Stone-Richards, Professor in the Department of Liberal Arts, College for Creative Studies and Co-Founder of Detroit Research

The Challenge Detroit fellows have spent the past five weeks working with Downtown Detroit Partnerships to create plans using a variety of methods and mediums to create better engagement and communication between downtown and the neighborhoods. In an effort to better understand the barriers that prevent people living in the neighborhoods from coming downtown, one that my group repeatedly heard was a feeling of disengagement. This can be seen in a variety of forms, one of these being a lack of vibrancy and character to attract people into the city’s center. One woman mentioned that she wanted to see downtown Detroit “more like downtown Chicago”, while others remarked that there aren’t enough cultural events, “like there used to be”, in the city center for them to identify with.

“We use art to have a seat at the table.” Jamii Tata, Director of Oakland Avenue Artists Coalition and Lead Organizer with Create Northeast Detroit

First, I would like to say that downtown is not absent of events and the arts. Over the years I have enjoyed going downtown for the Jazz Fest (the world’s largest free jazz festival), free lunch concerts at Campus Martius, Movement (one of the world’s oldest and largest electronic music festivals), the Concert of Colors, African World Festival Detroit, and many other similar events. However, that is not meant to displace other people’s comments. I have felt comfortable in downtown and felt a desire to seek out programming there, but that does not mean that all people in the neighborhoods or suburbs of Detroit have that same level of comfort, for whatever reason it may be. And I also agree that the level of engagement downtown has with the arts can be improved.

“For me, a healthy community is when our children believe that, when our children feel safe to imagine.” Dan Pitera, Professor of Architecture and Director of the Detroit Collaborative Design Center, University of Detroit Mercy

Relating the panel discussion to our project, trying to find ways to bring creative vitality into the most spotlighted neighborhood the city has, is tricky. Where does the creation of art, in any and all forms, fit into corporate buildings, along the congested streets, and in polished storefronts? Who sees the priority in funding educational programs for children, or art instillations, over some of the other struggles that downtown still faces?

“Art is not going to solve our problems. The name for solving our conflicts is politics.” Michael

“I reject the title of starving artist completely.” Jamii

I do not have the answers to these questions, but all of this does make me think of a similar situation in Dublin, Ireland. Anyone who has visited the major city in the past couple of decades probably passed through Temple Bar, a bustling section on the outskirts of the city’s center. Temple Bar became riddled with prostitution in the 18th century, and continued to suffer urban decay up until around the 1980s, when artists and small business owners began moving in because of the cheap rent. Residents of the area were eventually able to secure the funding for a non-profit organization to protect the property rights and cultural resurgence of the area. Today, it is a favorite spot for tourists to walk through the cobblestone streets, and enter into some of the colorful pubs for a pint of Guinness or an Irish coffee (which I have been told is much more often enjoyed by tourists than locals).

Many have claimed that the entire city of Detroit is going through this sort of “artist savior process”, which I don’t necessarily see. Yes, I agree that Detroit compares much better on paper than New York in terms of the price tag and the amount of influence available for individuals, but artists are not flooding the streets. And artists alone cannot improve Detroit’s economy and population. Neither can large corporations or individual billionaires. A downtown requires both the proper infrastructure, leadership, and diverse/ plentiful employment options, as well as the artistic breathe and vibrancy for it to be a healthy and prosperous community. And if the downtown of a city is healthy, then it has a better shot at supporting the smaller neighborhoods and communities that surround it.

“What would it be for something to be vital but not creative? It would be unnecessary. To be alive is to be creative.” Michael

Detroit is in a position right now where great change can happen. If downtown and the neighborhoods listen to each other’s needs and share both resources and creativity, wonderful and unprecedented things could happen for the city that has such a rich history, and surely an even richer future. 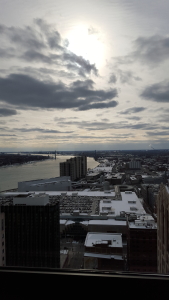