This Sliding Bar can be switched on or off in theme options, and can take any widget you throw at it or even fill it with your custom HTML Code. Its perfect for grabbing the attention of your viewers. Choose between 1, 2, 3 or 4 columns, set the background color, widget divider color, activate transparency, a top border or fully disable it on desktop and mobile.
< back to blogs
Fellows' Blog: Grace DeMeulenaere

Imagine a World Where We All Rode the Bus

As I preach over and over again, Challenge Detroit exposes me to a lot of important conversations happening in the City of Detroit. One of those conversations is surrounding regional transit. A topic I know many have talked about and many have been criticized about and I, as a Fellow and young mind in the city, have a few thoughts regarding this issue.

First, we met with a panel of five individuals from all different organizations within the city. These ranged from the M1 Rail, Downtown Detroit Partnership’s Bike Share program, the Regional Transit Authority of Southeastern Michigan, and GM’s Maven car sharing program. These individuals expressed to us that regional transit is a necessity for an urban city’s success if you want to increase connectivity from the suburbs into the downtown area, if you want people to utilize these means to get to and from a job, and if you want to create a more sustainable environment. And the best part of what they all talked about was how they planned to connect each other’s initiatives with one another.

Second, I attended the Detroit Policy Conference at Motor City Casino on Wednesday Feb. 24 where we talked about a gamut of issues affecting the city, one being public transportation. I sat in on a panel that consisted of individuals from four different organizations: the Regional Transit Authority of Southeastern Michigan, Northwest Unity Baptist Church & Detroit Practice Leader, Advancing Macomb, and The Kresge Foundation. They talked about the importance of regional transit, the I-75 expansion, how they will get suburbanites to utilize public transit, and many other topics surrounding the issue.

After having been exposed to these conversations within the past two weeks, you could say I’m intrigued to see how things progress and to obviously impart some of my wisdom (sarcasm) on the topic.

The first thing I want to touch on is why I believe regional transit is beneficial to our city, our communities, and to our environment. All major cities have some sort of mass transit system built into the infrastructure of their city. Why are we any different? New York has a major subway system. Washington and Chicago have railways. Why doesn’t Detroit, another great city, have something to accommodate its people?

Fun fact for you: 92% of people cannot travel to and from their job by public transit in under an hour. That sure doesn’t seem appealing to someone who has to be at work at 8 a.m. What time would you have to leave your house to utilize public transit and get to work on time? Too early for me that’s for sure. And what happens if the bus is late? Late more than once, you’ve lost your job. Strike one against public transportation.

What about the negative connotations that go along with taking public transportation? Being that this is the Motor City, people are heavily criticized and judged for not owning a vehicle. Are you poor? Do you not have driver’s license? Do you know how dirty those things are? Those judgments also play a large part in why many people choose not to utilize public transit. Strike two.

What about the fact that communities and neighborhoods are allowed to ‘opt out’ of utilizing public transportation in their neighborhoods? Come election time, the community decides that they don’t want a SMART bus coming through their neighborhood. Why do think that is? Is it the supposed stigma that comes along with people that ride the bus? There’s the third strike. Public transit (as it exists now), you’re out.

I’m sure the list of strikes could go on and on if you talked to the people who actually use public transportation on a regular basis, but we’ll keep it at those three. So what are some places for improvement according to Grace?

First, public transit is not easy to access. Now, isn’t that an oxymoron. Public = all people being able to access something freely. This is definitely not the case with what currently exists in the infrastructure. We need to create more easily accessible pick-up and drop-off locations so more people can utilize this public service.

This also leads into my next point about allowing communities to opt out of having public transit go through their areas. Having this as an option on a ballot says “we don’t really care about everyone else, and we don’t want to waste our time stopping in those places”. Talk about disconnect. That is the absolute number one way you are going to have neighboring communities have little to no interaction with one another. How do you create a cohesive ecosystem if you have groups and groups of people not interacting with one another? This option should no longer be on the ballot.

Also, we need to change the perceptions of what public transportation represents. It’s not just for poor people, or homeless people, or whoever else. It should be for everyone. We need to make it so EVERYONE knows its safe, its clean, its reliable, and its critical to creating a more sustainable environment.

Many people inside and outside of the city have expressed their opinion on the M1 Rail project. It’s good, it’s bad, it’s just going to be filled with homeless; I’ve heard it all. But what most don’t think about is how this project will encourage other projects around regional transit to spark up. For example, the M1 Rail travels down Woodward to connect from Downtown into New Center. At those various stops along the way, the Downtown Detroit Partnership plans to place bike sharing there so anyone who needs to travel a little farther than New Center can hop on a bike and travel the rest of the distance. This is just one example of how the public transit systems will start to connect and work off of each other to create an ecosystem of transportation.

What about the I-75 expansion? In my opinion, adding another lane for cars will only increase the congestion, not speed it up. I’ve been to New Jersey and Atlanta where they have five or six lanes on each side of the expressway and it was the worst driving experience of my life. More lanes does not equal quicker travel time. There is no actual need to spend $1 billion dollars to expand a highway system that is working just fine. Now, if they want to fix the potholes, I wouldn’t complain.

So how do we get people to adopt this new-fangled (sarcasm) idea of public transportation? We get community leaders involved and have them use their voices to pass along messages. We get organizations to partner up to create a web of intertwined networks promoting those same messages. We need people to give it a try and express their thoughts on the experience. We need input from the people who are going to be directly impacted by this resource. 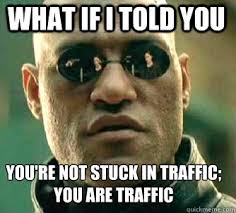 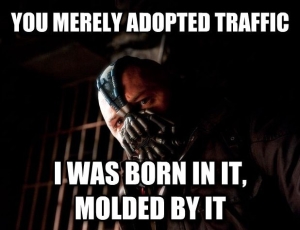