This Sliding Bar can be switched on or off in theme options, and can take any widget you throw at it or even fill it with your custom HTML Code. Its perfect for grabbing the attention of your viewers. Choose between 1, 2, 3 or 4 columns, set the background color, widget divider color, activate transparency, a top border or fully disable it on desktop and mobile.
< back to blogs
Fellows' Blog: Amanda Gettgen

13 Ways to Pedal Along With the Detroit Bike City Movement

In case you’ve missed the news, the Motor City is slowly but surely becoming known as Bike City. What do you get when you mix new investments in greenways and bike lanes, locally-based craftsmanship bike shops, a variety of places to grab a rental or pump your tires, and a growing number of bicycle clubs and organizations? A trendy biking culture and community movement that has made Detroit one of the top eight biking cities in the world to some cycling advocates. Don’t believe me? Even Apple has hopped on board to get a taste of the Detroit Bike City action with their commercial featuring Detroit based Slow Roll. Now I bet you’re thinking… where are all of these shops? How can I cruise on two wheels and make some new pals? When can I spin my wheels and explore the vibrant city of Detroit like never before? Don’t get your chain in a bunch, I’m here to pump your tires and grease your gears with the low-down on a few of the gems that are growing Detroit “Bike City.” 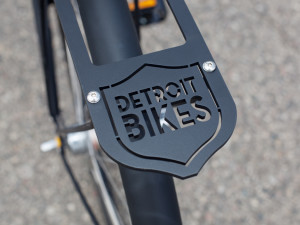 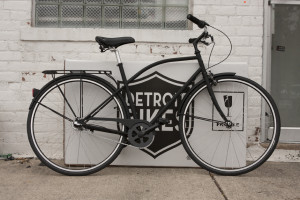 Detroit Bikes is on a mission to encourage cycling by making high quality, enjoyable, and easy to use bikes. Whether you’re commuting 20 miles to work everyday or you haven’t touched a bike since you wiped out in front of your math professor in your Junior year of college (don’t judge me), Detroit Bikes builds with you in mind. Want to check out their models? Stop into their new shop downtown across from Capitol Park or, if you’re lazy, scroll through their collection online. 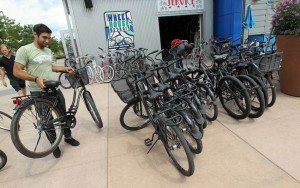 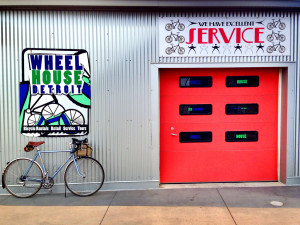 In addition to rentals, Wheelhouse Detroit carries local and national bicycle brands for you to purchase. Curious what they have in stock now? Check out the Bikes for Sale page on their blog to find your new baby. 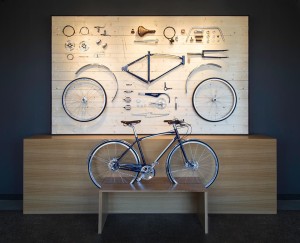 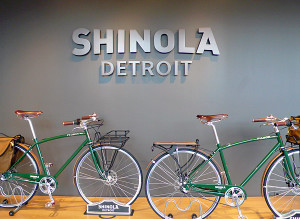 Each Shinola bicycle undergoes a precise, custom-level assembly by experts in at the Detroit Flagship retail in Midtown Detroit. Shinola believes that there’s only one way to properly build a bicycle, and that’s one at a time, by hand, with rigorous attention to detail and using only the highest quality components available. Click here to view a short film about their frame production in Wisconsin and assembly operations in Detroit. 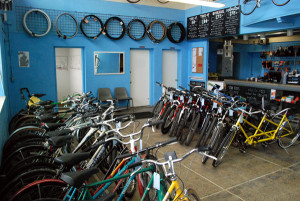 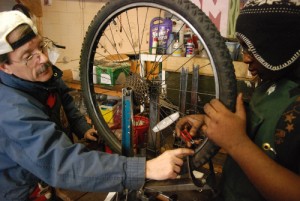 The Hub of Detroit is a full service bicycle shop, serving the Cass Corridor since 2008. The collective sells used and new bikes as well as parts in addition complete repair and restoration services, custom build services, power coating and consultation. This nine-member collective demonstrates how social entrepreneurship melds cycling education with retail by using 100% of proceeds from their sales to operate Back Alley Bikes, an organization that focuses on youth development, sustainable practices and community access by providing cycling education and services. 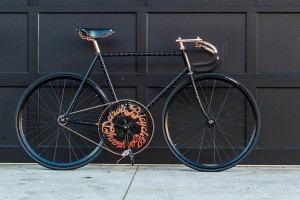 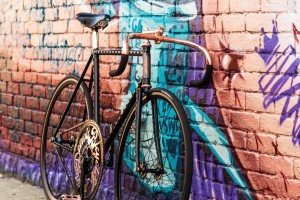 While Detroit is well-known for being the hub of the automotive industry, Detroit Bicycle Co. founder Steven Bock is re-introducing the Motor City to a motor-less mode of transportation. Since 2010, Bock has been building bikes by hand with quality, vintage-era parts and bestowing them with names inspired by streets in Detroit. Check out their complete line of bikes here. 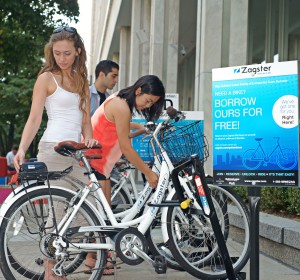 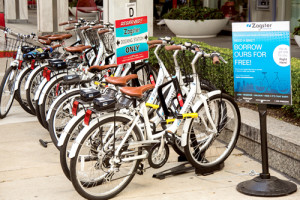 Zagster is a bike-sharing service that offers nearly 50 bicycles in downtown Detroit that can be rented out from one of eight locations for any given amount of time using the Zagster app. 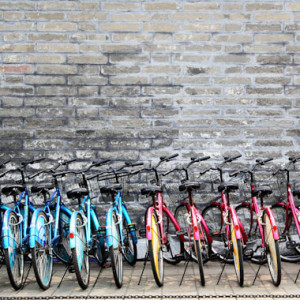 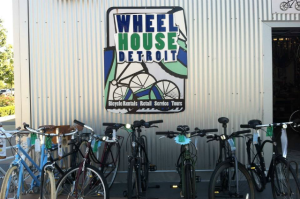 At Wheelhouse Detroit choose from cruisers, sport and comfort hybrids, road bikes and adult tricycles as well as accessories like tag-a-longs and baby seats and trailers to make your ride fun for the whole family. 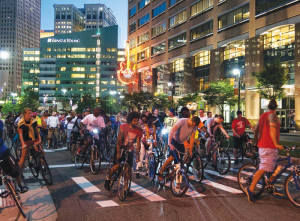 On Monday nights in Detroit a new community tradition has emerged. Slow Roll is a group bicycle ride that meets every Monday night in Detroit and has expanded into a Global network of community rides. Each Monday night cyclists of all ages and skill levels meet up at different venues and take a unique route throughout the city, including all the vibrant major and minor neighborhoods that make Detroit, well, Detroit. With Slow Roll you can enjoy your cruise at a slow pace, which keeps the group safe and gives riders a unique perspective of our great city and its neighborhoods. To join the movement check out the 2015 Slow Roll schedule here. Added bonus – listen to Jason Hall, speak about how Detroit Bike City is creating a healthier Detroit and contributing to its growth at TEDxDetroit.

During the summer months you can get the best of both worlds with a Motor City Bike & Brew Tour. Along the three hour themed tours, such as Prohibition and Auto History, cyclists stop to admire historical sites and highlights. The best part? Every relaxed pace tour includes lunch and beer at a local Michigan brewery. For obvious reasons, these guided tours are my absolute favorite. 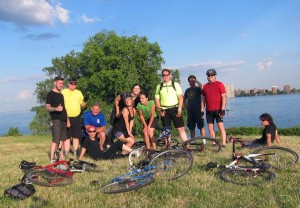 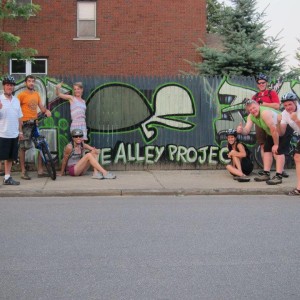 Bike Detroit is spreading positive energy, sharing smiles, and showcasing the beauty of every inch of Detroit through weekly community rides. Plus, by supporting local bike shops and eateries the organization connects businesses to the community on a more intimate level. Ready to explore? Look over their schedule and mark your calendar for the ride of your life. 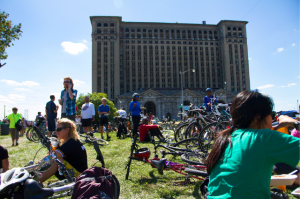 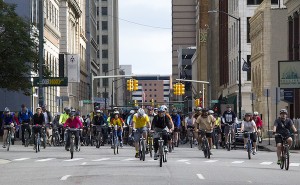 On September 19th take over the streets of Motown to explore some of the city’s historic areas and take in many of its most breathtaking sights by registering for the 14th Annual Tour de Troit 2015. But that’s not all Tour de Troit has to offer. Are you ready to take a journey across the Ambassador Bridge? Join Tour de Troit and 500 other for their annual Bike the Bridge ride on October 11th.

You Can Roll Your Own Way 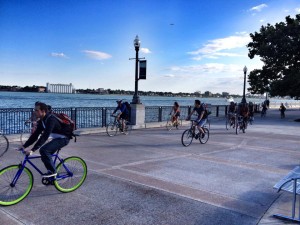 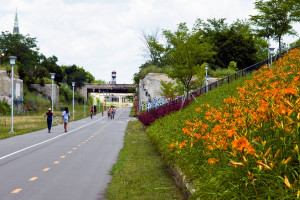 The Dequindre Cut Greenway is a 1.35-mile urban recreational path that has created a link between the Riverfront, Eastern Market the many neighborhoods in between. The greenway is well-known for its urban artwork and features a 20-foot wide paved pathway with lanes for pedestrian and bicycle traffic. Need a map? No worries, I’ve got your back. Download it here. 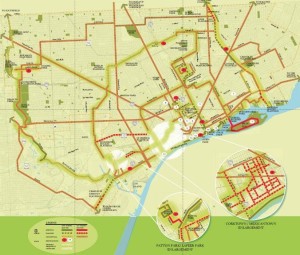 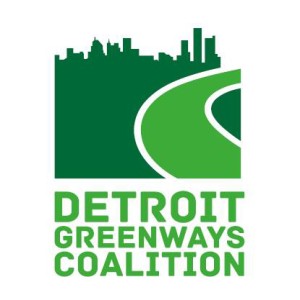 The Detroit Greenway Coalition is currently under development and planning to create a city wide network of greenways encompassing more than 70 miles of greenways and use additional miles of bike lanes for on-road connections. This Network would also provide connections to other neighboring and regional efforts.

But wait, there’s more! The following three greenway projects plan to link the Detroit International Riverfront through Corktown and Mexican Town to connect to the River Rouge and from there up-river to the River Rouge Park and The Henry Ford: Corktown-Mexicantown Greenlink, Southwest Detroit Riverfront Greenway and the Rouge Gateway Greenway.

Well, it’s time to stop spinning my wheels. As for you, my friend, it’s time to put it in gear and join the Detroit Bike City movement. I’ll see you on the streets. Stay tuned for more ways to roll through Detroit on two wheels.