This Sliding Bar can be switched on or off in theme options, and can take any widget you throw at it or even fill it with your custom HTML Code. Its perfect for grabbing the attention of your viewers. Choose between 1, 2, 3 or 4 columns, set the background color, widget divider color, activate transparency, a top border or fully disable it on desktop and mobile.
< back to blogs
Fellows' Blog: Esther Okunrounmu

I’ve officially returned back to my semi-roots. After a summer in New York City, I was completely torn. I realized that I had accomplished a lot after graduating and I never gave myself the credit. I was chosen out of hundreds of people for two extremely competitive fellowships, back-to-back, yet still struggling at times to pat myself on the back. I completed my first fellowship with the Multicultural Advertising Intern Program at Mother New York which was pretty tough to come to a close.  I had new challenges and experiences that came with the beauty of moving to a new city. After all, I had been in Metro-Detroit my whole life (apart from a short stint in Italy). I thought I had seen it all and I thought NYC was my new calling. I thought that if I wanted to fulfill my dream of becoming the modern day Peggy Olsen, I can’t scurry back to comfortable complacency. A place full of people that knew me so well with streets I knew like the back of my hand. I soon realized that maybe my timing was off. 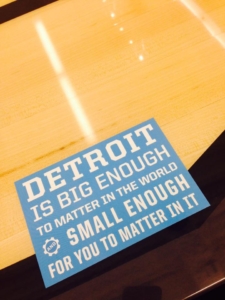 I yearned to be back in the city that is a large part of who I am. Detroit is different. Compared to any other big city, Detroit has its own unique way of making things happen. Behind the dust and rubble of a city once consumed with turmoil and burned to the ground, there was also beauty, selflessness, tradition and amazing people with stories to match. I feel protected, invisible, resilient and tested. I wasn’t quite ready to pick up everything and move my life away mainly because I know there is still work to be done in Detroit. The world of advertising in New York will always be there. I felt it was my duty to contribute to Detroit. It may be because I always root for the underdog. Despite its reputation and rumors, Detroit always does three things: progress, inspires, and hustles harder. I contemplated and had no doubt about my decision returning to this city.

All though I feel a sense of comfort, I also always feel the same sense on anxiousness of a new town, new people, and new work. Although I’ve been around Detroit all my life, I have never actually lived in the city. After four years of college I’ve gotten used to moving every year, but this year is different. I’ve gotten used to my set of friends and I have gotten used to being comfortable. I am on my own now, my parents quickly realize that. I am surrounded by new people and a new environment. I’ve always been admired by my dad for always being strong and independent and I owe that to him and my Mother. Adjusting has always been tough, especially when the people closest to me are now so spread a part. It always takes some time for me to completely be myself in a brand new environment, and it hasn’t been as breezy as a stroll in Roosevelt Park. 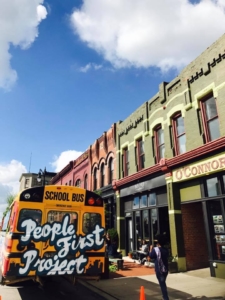 This is all a part of life. I’m thankful for the unconventional “Challenge Fridays” I have meant for making a difference with and for  people of all different colors, ages and backgrounds and I am thankful I have the financial and verbal support to do what I love in a city that I share many similarities with. Explorations from my new home of Corktown, to Old Redford, to Livernois have only begun to open my eyes to this special city and I cannot wait to document each town’s treasures.