This Sliding Bar can be switched on or off in theme options, and can take any widget you throw at it or even fill it with your custom HTML Code. Its perfect for grabbing the attention of your viewers. Choose between 1, 2, 3 or 4 columns, set the background color, widget divider color, activate transparency, a top border or fully disable it on desktop and mobile.
< back to blogs
Fellows' Blog: Jennifer Ehrhardt

10. Detroit Historical Museum – If you want to get an overview of the history of Detroit, there is no better place than this museum. Every exhibit is amazing. There is a working replica of an auto assembly line, a diorama of Detroit through the decades, and even a life-size model town in the basement. One would think such a jammed pack museum must charge a hefty ticket price but it’s FREE! (Donations are encouraged and after going through it, you’ll gladly fork over a few bucks.) 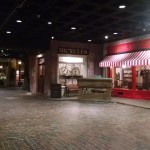 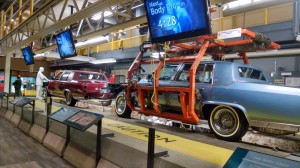 9. Canada – Fun fact: Detroit to Windsor, Canada is the only place in the continental United States where you go south to Canada. In a few short minutes via tunnel or bridge, you can be in another country. How cool is that?!

8. Detroit Institute of Art (DIA) – This is one of the best museums I have ever visited. The elegant marble lobby and entire construct of the building is enough to captivate you but there’s so much more. Van Gogh, Picasso, Monet, and Warhol adorn the walls, and there are extensive collections from ancient Greece, Rome, and Egypt to name just a few. One of the most famous and breathtaking pieces is Diego Rivera’s five sets of massive murals known as ‘Detroit Industry, or Man and Machine.’ And if you aren’t the art lover in your group, there’s a gorgeous bar where you can grab a drink while you do work or people watch. 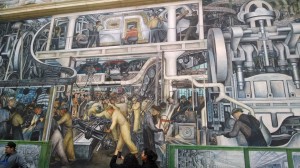 7. Heidelberg Project and Graffiti – In Detroit some of the best art isn’t inside the museums but rather scattered throughout the city. The Heidelberg Project was started in 1986 by Tyree Guyton, in part a political protest to the deterioration of his neighborhood. Baby dolls, polka dot houses, and items outside of my imagination create an interesting scene which attracts thousands of visitors from across the world each year. To some it looks like colorful garbage, to others it’s a point of pride in Detroit’s ability to create positive change. The Dequindre Cut is a great place to go and see a small sampling of Detroit’s graffiti scene. Once a railroad line, it has since been converted to a greenway allowing bikers, runners, and pedestrians a convenient pathway to the Riverwalk. 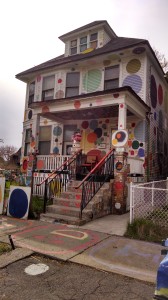 House in the Heidelberg Project 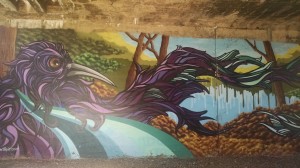 Graffiti along the Dequindre Cut

6. Riverwalk – Speaking of the Riverwalk, Detroit has an amazing 3.5 miles of bike and running lanes along the riverfront. Parks, plazas, a carousal, and a view of Canada make the Detroit Riverwalk unique to Detroit. 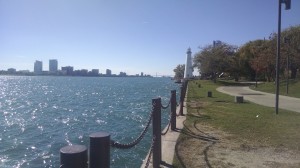 Riverwalk – Canada across the river

5. Motown Museum “Hitsville U.S.A.” – One would assume that the recording studio to so many greats (Stevie Wonder, Marvin Gaye, The Temptations, The Supremes, and The Jackson 5 to name just a few) would have to be a mammoth building so when you visit the Motown Museum, you’ll be stunned to learn it’s just two small houses.

4. People Mover – This one is probably not on many people’s list but I’m proud to say “I love the People Mover!” Sure it serves very little practical purpose but it is a great way to get a tour of Downtown Detroit for just 75¢.

3. Food – My whole blog could be dedicated to the delicious food of Detroit. BBQ, ramen, Mexican, pierogies, falafel, the list goes on and on. Detroit has been home to many ethnic groups over the decades and their culture continues to influence Detroit’s food scene today.

2. Architecture – Unfortunately I don’t know too much about architecture, but even a novice can see that Detroit’s architecture is reason enough to visit. Detroit has one of the largest surviving collections of late-nineteenth and early-twentieth century buildings in the U.S. So far, I’d say the Guardian Building is my favorite.