This Sliding Bar can be switched on or off in theme options, and can take any widget you throw at it or even fill it with your custom HTML Code. Its perfect for grabbing the attention of your viewers. Choose between 1, 2, 3 or 4 columns, set the background color, widget divider color, activate transparency, a top border or fully disable it on desktop and mobile.
< back to blogs
Fellows' Blog: Ryan Hebert

Anyone who has heard the Journey song “Don’t Stop Believing” has heard the line: “Just a city boy, born and raised in South Detroit.”

As someone who isn’t from Detroit and who wasn’t too familiar with the city before moving here, I just always took this line at face value.  Turns out there is no South Detroit.  Because of the orientation of the city along the Detroit River, “South Detroit” would actually be Windsor, Ontario, Canada.  A quick google search will show you that Windsor is not at the top of anyone’s must-see travel destinations.  Vice, in their usual swing through town for 10 minutes, talk to a bunch of weirdos, and then write a piece as if they know a place, style, had this to say about Detroit’s neighbor across the border, “This city near Detroit may be the worst city on Earth.” https://www.vice.com/en_us/article/windsor-ontario-residents-tell-us-why-its-not-the-worst-place-on-earth

Detroit suffers from a similar image problem around the US.  So a couple friends and I set off on a diplomatic empathy mission.  The three of us decided to actually seek out the treasures to be found in South Detroit, the worst place on Earth. 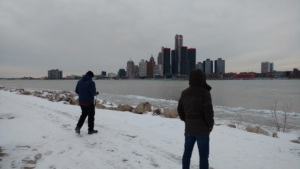 First stop: Tim Horton’s across the street from the border crossing.

Yes I know Detroit also has Tim Horton’s.  Even my office downtown has a Tim Horton’s.  But there’s something fundamentally better about getting it for 77 cents on the dollar and having a Canadian struggle to explain Tim’s “Roll Up the Rim” contest to your friend from Kentucky who just wanted his thermos refilled with black coffee.  She handed him an empty cup with his order and continued to repeat the phrase “you just roll it up” over and over until her coworker came over and offered the same advice, but slower.  I think the words “have you ever been to Canada?” were even uttered at one point.  It was fabulous.

This was my third time in Windsor and I’ve stopped at this welcome center every time and every time it’s been worth it.  Not only did we receive the warm welcome and courteousness I’ve come appreciate in Canada, the woman working the center found out our Canadian National Park Passes hadn’t come in the mail yet.  So she gave us each one, no questions asked.  Boom.  Free access to any National Park in all of Canada for the rest of 2017.  Follow the Beaver.

Again, you can find thrift shops in Detroit.  The Salvation Army there is great.  But it can’t hold a candle to the Goodwill in Windsor.  Need hockey skates? 10 bucks (before the exchange rate).  Need a 2010 Vancouver Olympics pullover? Of course you do.  Need a picture of Pegasus in an epic face off with other horses?  Probably not.  But it’s there.  And so are surround sound speakers.  Things made of wood.  Thousands of books.  The store is clean.  There’s any random Canadian artifact you could hope to find.  I’d put it on Windsor’s must stop list for anyone with enough sense to see that paying full price for clothing is a fool’s game. 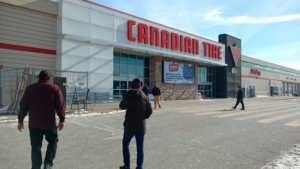 My comrades in empathy approaching the Tire for the first time.

A tire shop?  Yes.  And oh so much more.  Neither of my friends had been to one before.  One was excited, the other skeptical.  Both left with life-improving purchases.  For those who don’t know, Canadian Tire is a sort of Home Depot meets Cabela’s meets random Canadian things store.  I scored the warmest winter coat I’ve ever owned for pennies on the dollar.  One friend snagged a down jacket that could compress and fit inside an airplane pillow for a similar steal of a price.  The other upped our Slow Roll game for next season by finding a backpack soft cooler.  Canadian Tire folks.  Where dreams come true. 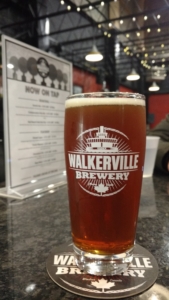 Not much to report here.  A solid brewery with $3.50 beers that are quite delicious.

This Irish Pub is in an actual house in the Walkerville neighborhood.  The interior vibe is similar to any Irish Pub you’ve been to anywhere in the world.  The waitresses wore kilts, but not in the Tilted Kilt sort of way.  Our waitress pegged us as Americans within minutes as we all proceeded to deliberately order terrible Canadian domestic beers (me in my Tim Horton’s beanie and one of my friends with his Canada mittens on the table).  She got a kick out of us trying to maximize the Canadian-ness of our experience and encouraged us to order poutine to complete it, a decision you will never regret.  The food was delicious and in a mashed potato, corned beef, and poutine-induced coma, we set off on a walk to our next destination… 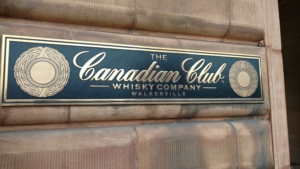 This distillery, which you can see from across the river in Detroit, was the epicenter of illegal booze smuggling into the US during prohibition.  The offices, known as The Canadian Club (yes, that whisky), are modeled after an Italian palace that Hiram Walker, the founder, decided he liked.  If you want to learn more, go on the tour.  Our guide was a bit awkward and long-winded, but the folks at Hiram Walker and Sons are very trusting in what they allow you to do on the tour, the one rule being: don’t touch any of the ledgers.  Other than that, have at it. 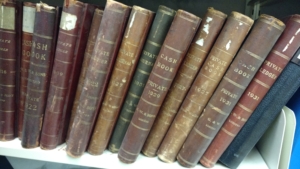 Some of the old money books down in the basement. 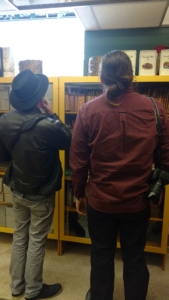 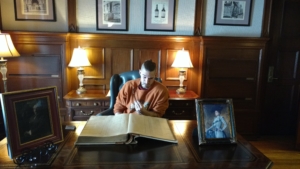 There were more shenanigans that happened after this as we wandered around downtown Windsor and along its riverfront, but I’ll leave that for you to discover on your own visit to Windsor.  You can do much worse than Detroit’s international neighbor to the south.

I’ll leave you with this: 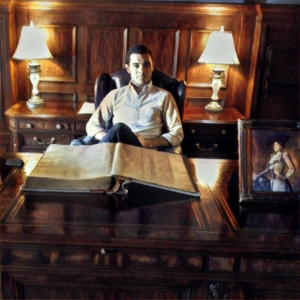