This Sliding Bar can be switched on or off in theme options, and can take any widget you throw at it or even fill it with your custom HTML Code. Its perfect for grabbing the attention of your viewers. Choose between 1, 2, 3 or 4 columns, set the background color, widget divider color, activate transparency, a top border or fully disable it on desktop and mobile.
< back to blogs
Fellows' Blog: Michael Paciero

Spring in the D

While it’s not 100% here yet (and may not be until May knowing Michigan), we’ve received a glimpse of spring here in Detroit the past two weekends with 60+ degree February weather on Saturday the 20th and Sunday the 28th.

It’s no secret that we’ve had an unusually mild winter here in Detroit. I almost called it a blessing. But from an environmental standpoint it just wouldn’t feel right because it’s actually pretty scary for all the reasons that climate change is scary.  BUT,  that’s a whole other discussion and I’ll save it for another time. For now it get’s an honorable mention.

Those concerns aside, I really enjoyed and took advantage of those extremely warm weather days and ventured out into the city. Here’s what I, and many people all over the city, did in celebration of spring coming:

Stop 1: The Dog Park – For a dog owner downtown, Grand Circus dog park is the place to be on a warm weather weekend day. April didn’t want to go home even after playing with other dogs for 20 minutes. 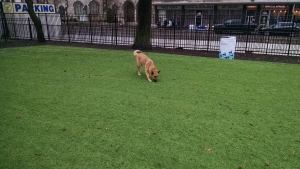 Stop 2: Recycle Here – Beautiful day for taking back months of hoarded recycling. Detroit doesn’t have recycling pickup in most of the city so “Recycle Here!” near New Center is the perfect place for all you fellow earth conscious Detroiters on a nice spring day. 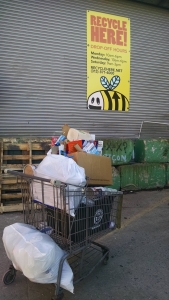 Stop 3: Dubois Street – This is where I go to get away from the city but still stay in the city. This Dubois street property on the East Side is a property of mine and since construction had slowed over the winter I stopped by to check on things. 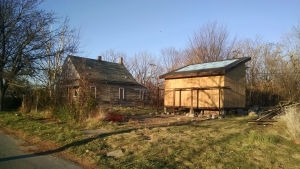 Stop 4: Greektown – Mom came to visit the city and walked over from my apartment to meet her for dinner at Pegasus in Greektown. There were many people out and about on the streets on my walk. Happy to see people spending time in the city. 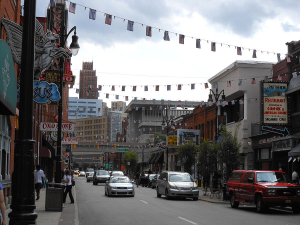 Stop 5: Ottava Via/Corktown – Nightcap happened out here where I met some of the other fellows for dinner and drinks. Never been to Ottava Via so happy to check off another Detroit restaurant off my list. I didn’t even have to wear a coat! 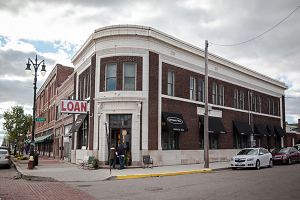 Stop 1: The Dog Park – Again, start the morning off right with a dog walk to the park. I bundled up but was surprised when I got outside and had to remove some layers. This is April, tired after her adventures. 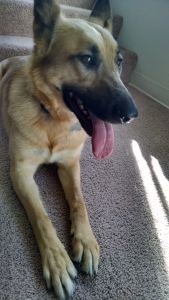 Stop 2: Run Through Midtown – A 3 mile run through the city is a great way to start a Sunday. I ran by landmarks like Brush Park, the new M1 Rail, and “The District” development 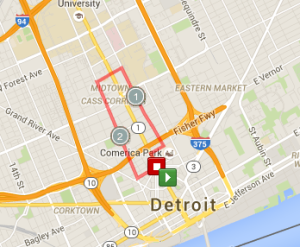 Stop 3: Dessert Oasis Coffee Shop Downtown – Time to get some work done. Here I met Mike Kurfess (fellow fellow) who biked down from New Center to get coffee and spend a couple hours working on some business ideas 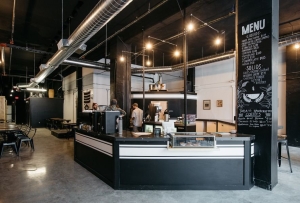 Stop 4: Riverwalk – Since it was such a nice day Mike and I chose to bike around the city. our first stop was the Riverwalk where it was packed with people enjoying the nice weather for the first time just like us! 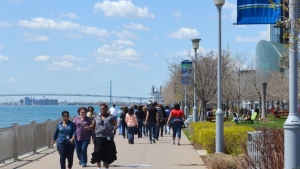 Stop 5: Dequindre Cut – The second half of the Dequindre Cut is open from Gratiot to Mack and Mike and I took the opportunity to explore it. It originally stopped at Gratiot. Anyone enjoying nice weather should check it out starting at the Riverwalk by the DNR Outdoor Adventure Center. 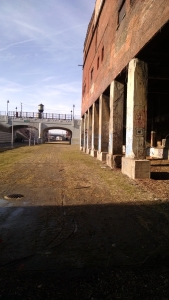 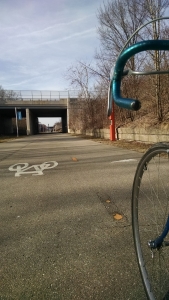 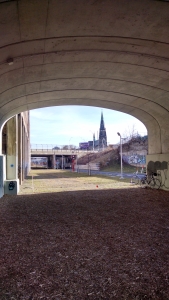 Stop 6: Dubois Street – The Dequindre Cut ending at Mack spits you out really close to my property on Dubois so we biked over to check it out. Really glad we did because we ended up having some great conversations with a couple of the neighbors who stopped by while also enjoying the beautiful weather. 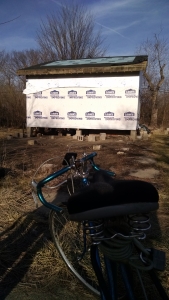 Stop 7: Slow’s to Go – After a long day of biking around the city out final stop was Slows’s secondary location in Midtown for a quick but delicious dinner. We even saw one of our other fellows, Imani, stop in with some friends! Pictured here is the Mike Hammer sandwich with a side of mac. 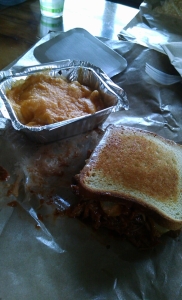 So there you have it. Spring days in February. I hope this gave some insight on how you can spend your time around the city as the weather warms up!