This Sliding Bar can be switched on or off in theme options, and can take any widget you throw at it or even fill it with your custom HTML Code. Its perfect for grabbing the attention of your viewers. Choose between 1, 2, 3 or 4 columns, set the background color, widget divider color, activate transparency, a top border or fully disable it on desktop and mobile.
< back to blogs
Fellows' Blog: Ian McCain

Before moving to Detroit, and especially before entering Challenge Detroit, race was unfortunately an afterthought. Growing up in a majority white suburb, going to a majority white college, I had never been confronted with racial inequality. I was somewhat aware that it existed. I did, however, believed conditions had improved for black Americans in the post-Civil Rights Era, and that for all intents and purposes, race relations had mostly been smoothed over. My past ignorance shocks and appalls me,  and despite that realization, I know I still have much to learn.

Two of my favorite activities during Challenge Detroit so far were our Orientation Week Tour through the Detroit Historical Museum with Jamon Jordan, and our Race and Equity Workshop with Lauren Hood. Perhaps favorite is a bad word… The biggest growing experiences for me, and in many ways I think for us as a fellowship, occurred during those two activities. They did not come without mental exhaustion, involved difficult yet honest conversations, and delved into cross sections I don’t think anyone fully expected.

Yet I felt something was missing. I wanted to talk about my struggles of coming out as a gay man. I wanted to talk about LGBT History in Detroit. I wanted to help others in our fellowship better understand gender, sex, sexual orientation, and also learn more myself. Stepping back, I realized two things: 1) I was not equipped to bring these topics into the conversation; and 2) While race has many issues that cross through and relate back to it, having both of those discussions focused on race and race only was crucially important to better understand Detroit.

It was a strange feeling: This was the first time I found something I felt Challenge Detroit needed, but was not currently providing or facilitating for fellows! I thought back to coming out in college my sophomore year, back to the small yet meaningful research I had done since, and specifically what activities and resources better informed and equipped me to interact in society as a LGBTQ person. I knew a meeting with Deirdre was coming up, so I wanted to see what she thought about it. Her response was positive and encouraging, to add something to the fellowship I saw was missing. Step One of this process will likely start with two resources: Identity Wheels and the Genderbread Person.

I am also considering whether or not to contact the Ruth Ellis Center to facilitate a discussion around this topic. While the wheels and genderbread person were introduced to me in college, I recently attended a REC Volunteer Training to get more involved in their work. A Social Identity Wheel and the Genderbread Person were both used, and it reminded me of the simple yet powerful introductions both provide to identity in society, and how that relates back to the LGBTQ Community.

I will attach both at the bottom (Click the links above for better images), but here is how they work:

I look forward to hearing feedback and suggestions on how to facilitate discussion around this topic for current fellows, and even possibly welcome Alumni Fellows to join the discussion as well!

“The only queer people are those who don’t love anybody.”–Rita Mae Brown 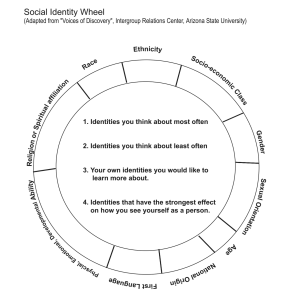 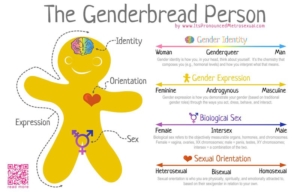