For our second challenge of the 2021-2022 program year, we were honored to partner with Marygrove Conservancy, a nonprofit organization with a mission to preserve the legacy of Marygrove College through equitable stewardship of a campus that exemplifies excellence in education, serving Northwest Detroit and the city overall. Eight teams of Fellows collaborated with the Marygrove team – led by COO Racheal Allen and Program Manager Turkessa Baldridge – along with community stakeholders over seven-weeks. Learn more from the perspective of each team! 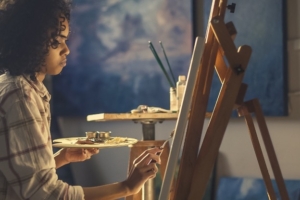 Our team was ecstatic when we realized we would be working together to explore how we might introduce a framework for continuous mentorship at Marygrove. During the empathy stage, we heard a diverse range of successful mentorship relationships, and the reasons why they were successful for Marygrove’s stakeholders. The most consistent answer was that people found mentors organically while engaging similar interests, and we knew this must be incorporated into our project. As we moved into the define stage of our process, our team had several powerful discussions around how to approach and innovate the notion of mentorship. We tried different names like, shared learning partners, co-learning companions, career guides and more, because we unanimously agreed that mentorship as it is commonly understood functions through a teacher-student dynamic, and that dynamic should be one where members are aware that they are there to grow together and learn from each other. We still include the term “mentorship” throughout our deliverables and vision because we recognized it has already been embedded within common vernacular, so we decided to innovate and incentivize how mentorship is understood and engaged with at Marygrove through our approach and deliverables.

As we began to prototype what we believed to be the co-learning program our community partners were looking for, we were stopped in our tracks. “Hold on guys! Let’s rewind!” Those words hit us like a bus. It was the end of our fourth day and we were running our plans by our partner liaison. Excited to get the thumbs up and finally get to work on the build out, we were expecting to hear a full yes to proceed. Instead, we heard, “Team, I like your co-learning program idea but I don’t think that’s what we’re looking for. We want to be able to foster space but not completely handle so much of the leg work of the program.” Our mouths dropped but we understood why our community partners were not so keen on our original idea. Carrying out a program with limited staffing wouldn’t be as successful as one would hope for. Here we were, the end of the fourth day, having to pivot. It wasn’t what we had hoped to hear, but it had to be revised and if there was any group that could do it, The Mentorship Team sure could get it done.

Now I know what some would think, “You all had to go back to the drawing board, right?” Not completely! Not all was a loss which was why our story was a success in more ways than one. See, an original component of our co-learning program was two events that helped encourage organic “mentorship-like” relationships to happen. We created these events after speaking with stakeholders and understanding that most mentorships were created organically, not formally or traditionally. What were those events you ask? A Creative’s Block Party and a How I….Series. Both would allow for people to meet and form a relationship on their own without force. After speaking with our liaison and asking if event-based mentorship would be best, they excitedly nodded their heads. We were on the right track!

Vroom, Vroom, Vroom….We speed, we build, we execute, and our partners love it! With such a late pivot, the team experienced an unexpected obstacle. Different from the ecstatic feeling that came over us in the beginning. We are so incredibly proud of ourselves as we met the challenge.