Nerves, collaboration and a year in Detroit

My favorite professor in school described film, the field of study I studied and subsequently worked in during my time before Challenge Detroit, as a really beautiful collaborative experience. Each department works in their own little world–camera department preps lenses and sets the camera, lighting gives the scene life and nuance, production prints anything anyone tells them to, and the director rehearses with actors in between bouts of wardrobe and makeup. For a time, one could forget that we are all working toward a common goal, but like clockwork, the dull roar of a film set starts to mellow out as each department approaches their own finish line, and each person on set starts to see their piece of the process come into focus. When it’s time to actually shoot the scene, each person, in their own world, working toward their own goal, only thinking about their own responsibilities, grow quiet to capture the moments that will eventually be put together into a final film, commercial or music video. For a little while, you could forget that we were all working toward the same goal, but when everyone gets quiet at the same time, peering over shoulders to get a look at the monitor, standing in the next room looking at the whole scene from just out of frame, it becomes a very poignant reminder that we are all working together, that we all love our work, and that each of us played a small but not insignificant role in the creation of this thing none of us would have been able to do on our own.

When I first started Challenge Detroit, I was nervous. Nervous about living in a new city without a built-in network of friends, nervous about whether I was choosing the right path by sidelining my film work and nervous about a job in motorsports that I knew very little about. I am happy to say, in the closing weeks of the fellowship, that none of those difficult details carried themselves through to the end of the fellowship. I have developed a new network of friends and collaborators in Detroit whom I can no longer imagine my life without, I am a motorsports fan to the extreme and will love to watch IndyCar and IMSA even when my job no longer requires me to be knowledgeable of it and I am no longer worried that I made the wrong choice, largely because of the work I did on my impact project.

For the final project of my Challenge year, I worked with Cinema Detroit, a non-profit that is also the only 7 day-a-week, first-run movie theater in Greater Downtown. Working toward greater awareness and retention of patrons for the theater, I developed new interior design and lobby programming, created social media strategies and artifacts, and developed a sponsor strategy for Cinema Detroit to gain new collaborators in business and community spaces. Being able to work so closely with Paula and Tim Guthat, the owners of the theater, showed me how important it is to continue to support all of the pieces of the work that you love. Even if it is a small theater with two screens, supporting that space through patronage and labor supports the larger film culture of a city, and that is work that I have always been passionate about and am so proud to have been able to work toward during my Challenge year.

While I was nervous that I might not be able to work in the beautiful collaborative space of a film set during my Challenge year, I was surprised and fulfilled to be able to work in my own zone, almost lose sight of the goal me and my team were working towards, before realizing that each of our efforts were working toward a greater goal that I was able to see come to fruition. In our Challenge non-profit work, during the third team project working with Century Forward in the Fitzgerald neighborhood, my team was tasked with creating a residents association guide. Each of us worked on a small piece of the product, and in the days and weeks and hours leading up to the end of the project, sometimes it felt like we were all working on separate parts of the goal and that the sum of our efforts were greater than the pieces on their own. Those moments when we can all take a breath, see our work come together in predicted and unexpected ways, and know that together we have created something none of us would have been able to complete on our own–those are the moments I was scared to lose when I started my Challenge year, the moments I am so grateful were present in my Challenge year and the moments that I will always remember about my Challenge year. 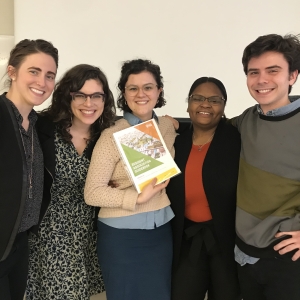