This Sliding Bar can be switched on or off in theme options, and can take any widget you throw at it or even fill it with your custom HTML Code. Its perfect for grabbing the attention of your viewers. Choose between 1, 2, 3 or 4 columns, set the background color, widget divider color, activate transparency, a top border or fully disable it on desktop and mobile.
< back to blogs
Fellows' Blog: Johnnie Wagman

Living in the Dark

For 33 hours this week, I did not have electricity. An ice storm early Sunday morning caused tree branches to become heavy and break, taking down power lines as they fell. We lost our power around 1 pm, after the temperature had risen and things were rainy; we thought we had made it through the storm. Our house has a generator build in and it kicked on immediately, running the lights and refrigerator, but after about an hour, it stopped. We figured we had overworked it and the power would probably be back in an hour or two anyways, so we just let it be. But by 5pm it became clear that the power would not be back on anytime soon. Over 300,000 houses and business had lost their electricity. 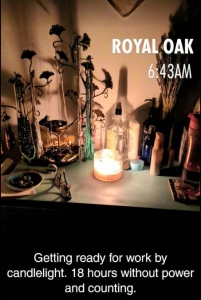 My car was trapped in the garage. We have a stand alone garage, with no service door or second entrance beyond the power door. There was no way to switch the motor from automatic to manual. Our furnace wasn’t running. Our house was getting cold. I felt trapped and alone and unsure of what to do; there was no one to figure out the situation but myself.

I started texting co-workers to set up a ride to work and then called a friend who still had power to come get me and feed me. It felt apocalyptic driving past the dark houses, down dark streets, and through intersections with no stoplights. It seemed as though something horrible had happened and everyone had left.

Things were not any better the next morning. The indoor temperature was 58 and outside was 36. I was grateful to get to work and be in the warmth. A hot cup of tea and my reheated leftovers have never tasted so good. Our house was estimated to have power restored by 11:30 pm, but by the end of the day, I was not optimistic and determined to take matters into my own hands. When I got home, my roommate and I spent an hour on our cell phones trying to figure out how to troubleshoot the generator. We finally got it going around 7 pm and everything in the house started running. We quickly opened the garage and freed her laundry that had gotten trapped in the washing machine.

I was almost disappointed when power was restored at 10pm. I had been so proud of myself and my roommate for figuring things out and fixing the generator. Turns out, we were lucky to have things back to normal so quickly. Lot’s of people and business in our area were still out Tuesday night, and as of 9:40 pm Wednesday, 5,000 of the 390,000 who lost power were still in the dark. 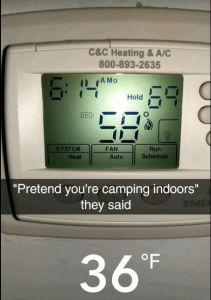 There are two instances I can remember of the power going out for more than an hour growing up. It was never overnight.  A quick internet search informed me that power outages are relatively common in Michigan. It ranked fourth nationally in power outages, behind California, Texas, and New York. If you’re doing the math, that leaves Michigan with the most outages per capita.

Further research indicated that a similar event happened just over a year ago, leaving some without power for over 5 days. Additionally, no one from the area was surprised to learn I have a generator built in to my house. So why all the power outages? Apparently, trees and overhead lines are to blame.

Although it was a nuisance, losing power made me realize how much we rely on electricity and often take it for granted. It made me grateful I’ve never questioned whether or not I can afford to pay my electric bill. For many in Detroit, making ends meet is a challenge and tax foreclosure is a serious problem the city faces. So although my 33 hours in the dark were an inconvenience to me, for some, it’s a daily reality.