This Sliding Bar can be switched on or off in theme options, and can take any widget you throw at it or even fill it with your custom HTML Code. Its perfect for grabbing the attention of your viewers. Choose between 1, 2, 3 or 4 columns, set the background color, widget divider color, activate transparency, a top border or fully disable it on desktop and mobile.
< back to blogs
Fellows' Blog: Natalie Punzak

The outcome of the 2016 Presidential election shook me up — not because polls were misleading, not because I was surprised that the candidate I supported could be unlikable, but mostly because of the realization that my belief in equality is not uncompromisingly valued by the majority of our country. I am shocked and disappointed that nearly half of voters (and that nearly half of eligible citizens who DIDN’T vote at all) compromised the values I hold highest in the name of perceived security or “the economy” or protest. The hateful sexist, ableist, racist, classist attitudes demonstrated by President-elect Trump and his supporters horrify me. I’ve read articles and listened to podcasts and I get why people voted for Trump. But my problem is that fundamentally his outspoken hateful, discriminatory views were not deal breakers to 62 million Americans.

I awoke November 9th to social media feeds that expressed sadness, horror, and fear. But the disconnect and dichotomy between my almost entirely Blue circle of friends, classmates, and coworkers, and a country that elected a Red candidate startled me. I realized that the polarizing nature of my community’s liberal beliefs has resulted in the silencing and shaming of opposing views. I noticed, too, that sadly many people do not engage with problems like inequality beyond the internet. I don’t want to be one of these people. The arrogance of this perceived moral high-ground has, ironically, created a culture of intolerance that coincides with a general belief that “speaking out” on Facebook/Twitter as an an ally/advocate for marginalized communities is enough to qualify yourself as a good person. And I guess that’s sorta better than the alternative of dismissing these issues, but it is far from enough.

The last year of my life has been most consistently defined by a newfound awareness and passion for social justice and equality; this journey drew me to Detroit and to this fellowship. I am proud to contribute toward change in Detroit through CD’s non-profit work and through HAA’s impact on the city’s built landscape, but this still does not feel like enough to me. The outcome of the election, and more importantly, the reality that systemic inequality persists in our country, is daily motivation for me to engage in behavior that supports change.

Last weekend at Eastern Market I took this photo at a vendor’s table. 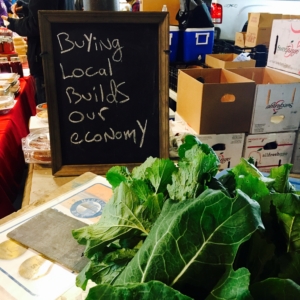 The sign was accompanied by several others with phrases like “0 food miles,” and “vote with your dollar.” I spoke with the vendor about how consumers shape politics and the economy, and how the decisions we make every day have a great impact on the type of world we’d like to create.

Consumption can and should be active instead of passive, because the places we shop and media we consume and way we spend our time have implications for the world beyond ourselves. Consumption is powerful, and we relinquish our own power to the sources we consume from. And as I’ve been thinking about consumption, and I’ve realized how important it is to do the opposite! by investing my time and money and energy into causes and organizations that contribute to a just society. This goes hand-in-hand with educating myself about implications of consumption in my daily life, so that I can actively take from and give to organizations and media and products that align with my values and beliefs systems.

Chipping away the overwhelmingly complex issue of systemic inequality requires this kind of engagement and commitment every day. And although our economy and social equality are equally complex, separate issues, they are also tied together in many ways. I may not be able to understand these ways right now, but I know that they are very real. All of this goes to say that every aspect of my life must reflect my committment to and support of equality.

I don’t want to end this post feeling entirely optimistic because, frankly, I’m not there yet. What I have for now is a fiery drive to be a better citizen, listener, advocate, volunteer, consumer, and person. This program has positioned me and all of the fellows to be change-makers in Detroit and beyond. That task sounds big and scary, but I am realizing that it can be accomplished through small daily behaviors that become a lifestyle. I have woken up each day this month asking myself “How will I do better today?” I will continue to rely on that inner voice to guide me toward a life that reflects my values in all aspects.

If you’ve felt anything similar to this slew of feelings, here are a few resources/guides that have helped me (productive media! positive use of time!):