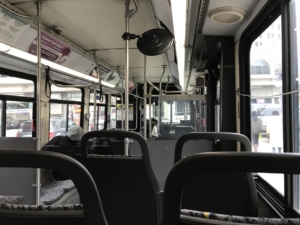 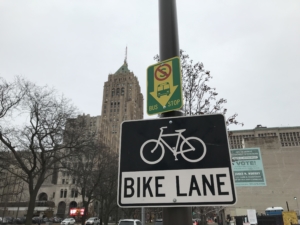 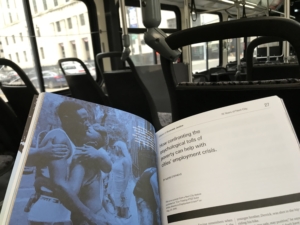 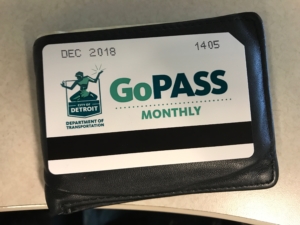 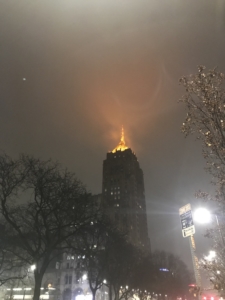 Though I spent time in Berkley and Birmingham as a child, I hadn’t ever spent as much time in the city of Detroit as I did this summer working on local films and commercials. I felt an important history within Detroit’s neighborhoods; a brief window into places like Brightmoor and Boston Edison made me excited for the coming year. But I hadn’t yet moved into the historic New Center District, where I am living now.

Minutes away from the Fisher Building, I thought, “now I’ve made it, this summer was a brief window into Detroit but New Center is where I will truly understand Detroit and discover my place within this city.” From my apartment on Seward, I drove to work each day, understanding only the speed and frustration which characterized my morning commute.

Though members of the Year 7 Fellows encouraged public transit, learning the Detroit bus system was daunting, especially with my car and a reserved parking spot waiting for me each morning. But as soon as I took the time to learn and finally rode a DDOT bus at the beginning of December, I remembered how much I missed public transit.

Being from greater Chicago, I always adored the L, the vast subway system that connects Chicago neighborhoods to the downtown Loop, and which I ride nearly every time I am in the city. Greater Chicago’s Metra system, connecting suburbs to the city through key downtown train stations, had a stop minutes from my parents house, meaning I seldom drove in Chicago at all.

When I started riding DDOT this month, I remembered the free time I missed when I was riding the trains in Chicago. My mornings were characterized by reading and writing instead of sleeping late and speeding. I even started waking up earlier. Now I could spend time walking through Downtown Detroit instead of rushing to arrive seconds before 9:00 am each day. But it wasn’t just walks and newfound time that filled my mornings this month. I started feeling more energized, more productive and more engaged.

To me, driving to work feels like I’m inside an egg. Completely separate from the rest of the world, I float down the Lodge, making less than ten turns during the trip, reaching my destination in a matter of minutes. If someone brakes in front of me, they are reacting to the person in front of them, but I am still annoyed because they are slowing me down. Whoever is behind me has to brake for me and may be equally peeved by someone slowing them down. Each person in their own car on the road is concerned with their own being, and anger stirs quicker among a group of cars in rush hour than almost anywhere else in the world.

But on the bus, and on public transit in general, I feel less concerned with the actions of an individual, and more in tune with a larger community of individuals, all equally affected by the inconveniences of that particular commute. I feel part of a larger community when I ride public transit; if something delays our progress, a collective annoyance is directed at some unseen force, and it feels as though, for a brief moment, everyone is in the same boat together.

But my happier mornings won’t bring equity to the public infrastructure of Detroit; my geographical location makes all modes of transportation more accessible, and if I miss the bus I can rely on my car to get me to work, a privilege others do not have in the city. I am thankful for DDOT, which has made my life a bit easier this month, but there is a lot of work that needs to be done before we have equitable transit in Detroit. Moving forward, I hope to be an advocate for investment in these systems, as well as continue to explore the city using DDOT to gain a fuller understanding of how the system works for Detroiters in other neighborhoods.

I haven’t yet found my place within Detroit, but through the bus system, at least, I’ve been a bit happier when I get to work every day.