This Sliding Bar can be switched on or off in theme options, and can take any widget you throw at it or even fill it with your custom HTML Code. Its perfect for grabbing the attention of your viewers. Choose between 1, 2, 3 or 4 columns, set the background color, widget divider color, activate transparency, a top border or fully disable it on desktop and mobile.
< back to blogs
Fellows' Blog: Erin Cardwell 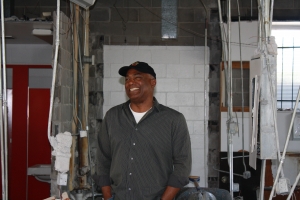 Lester was born in Trinidad and Tobago, a small island about seven miles off of the coast of Venezuela at the closest point. He grew up in Brooklyn and keeps his New York accent to this day. Lester moved to Detroit 21 years ago, the same year he lost his mother, Norma G.

His mother is not only the inspiration, but also the namesake of his food truck and soon-to-open restaurant: Norma G’s Fine Caribbean Cuisine. Lester sees his restaurant as a way to share the culture and flavor of his birthplace. “When you… enter(ed) houses in the Caribbean, it wasn’t fancy, but you were served… You were treated with a level of respect, and that’s what I’m trying to bring across.”

Lester’s restaurant will be part of the revitalization of the Jefferson East neighborhood of Detroit. The new bike lanes and redeveloped sidewalks are all part of the effort to create more foot traffic and bring people into the neighborhood. “My job is to make this a restaurant/bar, which is what they wanted in the neighborhood. I’m hoping to make it a destination. And that’s been my dream and goal for a while so it kind of matches well with what Jefferson East wants.”

Lester has been developing this concept for years. His food truck was a way to test the market. His business and flavors were well received, but he kept running into one problem: “People kept asking me “Where are you?” I’m not anywhere: I’m a truck! Come find me! They started asking for a brick and mortar.”

Aiming to meet his customers’ demands, Lester started to reach out to banks to fund the creation of his restaurant. His excitement turned to frustration when he realized the lenders he was speaking with did not share his vision. “I did a full two-hour presentation; they never even called me back,” he said of one bank.

Knowing the challenges Lester was facing to obtain financing, one of his mentors introduced him to Matthew from ProsperUS Detroit. “When you get turned down, it hurts. But then you get up and do it again. And you meet people like Matthew. He gets it,” he says with a smile.

ProsperUS Detroit’s Lending Program provides access to capital for start-up and existing small businesses that otherwise might not have access with traditional sources. “I was lucky when I met Matthew. We probably talked for an hour and 45 minutes and at the end of the conversation he said “I get this, this makes sense,” Lester recalled of their initial conversation. He believes that Matthew could sense his passion, and that convinced him to lend to him.

And it’s true! ProsperUS Detroit focuses on the character of its borrowers, rather than credit score or collateral, to assess credit worthiness. Through this program, they have closed over $500,000 in loans to neighborhood entrepreneurs from $5,000 to $25,000 since 2014.

“I think when you look at something like ProsperUS, the comfort level I had with Matthew was just about the two of us sitting down and having that level of understanding. It’s more about the relationship.”

Lester stands in his future restaurant, currently in the early stages of the former bank’s deconstruction. He points at the debris-covered floor and describes where the hostess station will go, the kitchen, the sliding doors and outdoor seating. He smiles as he looks up at the ceiling and says the electricity will be cut this week and they can start taking down the web of hanging wires. One cannot help but smile at his vision, at his passion, and of course, at the idea that anything is possible with the right ingredients.