This Sliding Bar can be switched on or off in theme options, and can take any widget you throw at it or even fill it with your custom HTML Code. Its perfect for grabbing the attention of your viewers. Choose between 1, 2, 3 or 4 columns, set the background color, widget divider color, activate transparency, a top border or fully disable it on desktop and mobile.
< back to blogs
Fellows' Blog: Paulette Bolofer

You can take a girl out of Detroit…

I am a Detroiter. No, I was not born here; yes, I am an immigrant. I currently live 4 miles outside of the city limits, but I am still a Detroiter.

I was born in another country on the other side of the world on an island called Bohol, but ended up in Northwest Detroit at the age of eight; living across the street from what is now known as Sinai-Grace Hospital. My mom, a nurse, had lived and worked in other countries and states, but decided to settle in Detroit. I asked my mom recently why she didn’t choose to live in California or choose to stay in New York, and she stated that at the time, there was more opportunity here; jobs, a decent cost of living, good schools and community (a lot of her nursing school classmates chose Detroit too).

As I mentioned in my application video, Northwest Detroit is where I learned how to speak English, where I learned how to play sports (thank you Coach Cochran!), where I first had a peach turnover (Knudsen’s Bakery), and many more firsts that occurred from the age of 8 to 18. I went away for school and lived in Kentucky, East Lansing, New York and California, but everywhere I went, Detroit was still home.

I vividly remember an incident that occurred while I was living in New York. It seemed like it was the height of all the negative publicity on Detroit, and there was this insatiable appetite for Detroit “ruin porn.” I was on the F train riding from Queens to Manhattan. Some passengers were having a discussion that somehow ended up on the topic of Detroit. My ears perked up with curiosity, only to be upset by what I was hearing. The passengers spoke with an authority and disdain for Detroit that could have only come from people who had no doubt lived in (at the very least visited), or had some sort of familial ties to Detroit. I chimed in and asked “Have you been to Detroit or have family and friends there?” One man answered no, and another said he wasn’t from Detroit but that he lived somewhere in Mid-Michigan ten years prior. My immediate reaction upon hearing their responses was defensive: “Oh, I’m from Detroit city proper, and my family still lives there. It’s not desolate like they (the media) make it seem. People still live and work there, and there are still a lot of good things happening. There’s a lot of problems but what city doesn’t have them?” The conversation came to a halt and the car became quiet. I’m not the type of person to do something like that (at least not back then anyway), but upon hearing how those passengers were trash-talking Detroit, I couldn’t help it. I was insulted and saddened that a city that had given me and my family so much, was seen in such a poor light. I felt like I had to protect Detroit and give it a voice at that moment because I am a Detroiter. 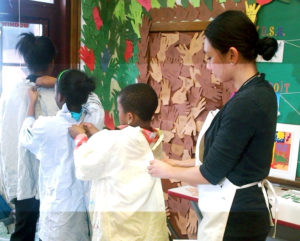 My first experience volunteering at a DPS elementary school.

Don’t get me wrong, my feelings toward Detroit are complex. I’ve had moments where I wasn’t so proud of the place I call home, and sometimes I felt betrayed by it too. From my family home being broken into, to the numerous attempts to steal or break into our cars, to my high school and elementary-middle school being closed, to city services almost becoming obsolete, to feeling like the place I grew up in was no longer safe, and that I couldn’t trust the leadership in the City, there was a stretch of time where one thing after another almost made me lose my love and hope for Detroit. I had just moved back to my mom’s house from California and in my head I kept thinking “I am NOT staying here. I am moving back to California after my mom gets better.” Then, for the first time, I volunteered at an elementary school in the Detroit Public School system. After a few hours of working with the students, I began to feel something I couldn’t define, let alone accept at the time. I know now that it was the moment where my real purpose was starting to come into view. I fought the pull that I felt, but everything just seemed to fall into place. I’ve had many opportunities to leave Detroit again, but in my heart I know I’m not finished here. I feel like I’m just starting to fulfill my purpose and I still have so much to learn about this City and so much more I want to give. That’s why I am so grateful and excited for this year ahead with Challenge Detroit. I know that this experience will allow me to dig in and get to know the City on an even deeper level. I hope that one day, the efforts of every Detroiter (old and new, near and far) will come to fruition, and people who are looking for the same opportunities that my mom and her classmates were looking for back then, will look at Detroit and say, “That looks like a good place to live in. I think I’ll make Detroit my home.” and they’ll be able to do just that.