This Sliding Bar can be switched on or off in theme options, and can take any widget you throw at it or even fill it with your custom HTML Code. Its perfect for grabbing the attention of your viewers. Choose between 1, 2, 3 or 4 columns, set the background color, widget divider color, activate transparency, a top border or fully disable it on desktop and mobile.
< back to blogs
Fellows' Blog: Annie Gough

Bliss Lane: improving Detroit’s neighborhoods one alley at a time 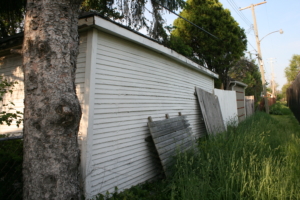 One reason I am grateful for my Challenge Detroit experience is for hearing individual stories of strength from people all over the city. Be it starting a business from scratch or saving the community’s park, to everything in between, being surrounded by countless determined and ardent people has energized me to put in my best effort towards our Challenge projects.

In the famous words of Detroit Experience Factory’s Jeanette Pierce, “Detroit is big enough to matter in the world, and small enough for you to matter in it.” I have seen this statement be reaffirmed on numerous occasions, oftentimes in the form of one individual’s or a small group’s narrative. From local businesses like McClure’s and Good Cakes and Bakes, to the origin story of the semi-pro soccer team Detroit City FC, to the efforts of the Brightmoor Artisans Cooperative to provide nutritious food and employment to its community, to the simple act of people taking care of a neighboring vacant lot, the list of Detroiters seeing a need and taking initiative to fill it is endless. One such story I have been fortunate to hone in on within the past month has been that of S.A.Y. Detroit Play Center, also fondly known as Lipke Park to the residents of the Osborn neighborhood.

For my Challenge Detroit individual impact project, I partnered with Restore NED and the 8 Special Streets initiative on the Bliss Lane mural project.  8 Special Streets is a faction within Restore NED that focuses on the blocks between Outer Drive and House Street, Van Dyke and Outer Drive again, with the intention that concentrated and committed effort will lead to successful outcomes and thus be a model for outward expansion. Led by Karen Washington of 8 Special Streets in an effort to beautify and engage her community, the goal of the project is to clean the alley in between Bliss Street and Lipke Park, and paint murals on the garages facing the sports fields. I came on board to help organize and track the project, but in the spirit of collaborative impact, I wanted to also offer up my skill of narrative writing. And so I have been interviewing homeowners and stakeholders in an effort to document the story of Lipke and the struggle many of the nearby residents endured to transform it into the beautiful space it is today.

Many adults I’ve talked to who grew up in the area have spoken fondly of practically living at the park as kids, swimming in the outdoor pool in the summers and attending various sports practices throughout the year. Sadly, due to a lack of proper maintenance, the facilities went into a slow decline until it was abandoned for about a year and then put on sale by the city in 2012. The land was set to be sold to the Salvation Army, which would have terminated any hope for future restoration. And so a small group rallied together to save Lipke Park. After 14 months of raising funds and talking to the mayor’s office, city council, media and other stakeholders, the battle was won. Lipke would remain a park, and would be run and partially funded by Mitch Albom’s charity S.A.Y. Detroit, with further funding coming from the Detroit Pistons and Detroit Lions quarterback Matthew Stafford. The funding was utilized quickly, and now S.A.Y. Detroit Play Center can boast a crisp turf football field, high-quality indoor facilities, and just recently a brand new baseball diamond (they are finishing up the fence line as I type this post). 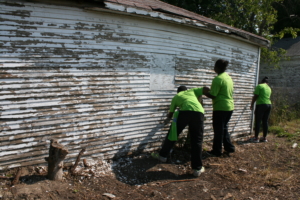 Students involved in the S.A.Y. Detroit Play Center summer program help to scrape paint from one of the garages in preparation for a mural to be created.

Coupled with the refurbished fields and buildings is the programming that S.A.Y. offers. Yes, there are plenty of athletic options, but S.A.Y. also emphasizes academics (kids have to maintain a certain grade point or enroll in the on-site tutoring program to participate in sports), and also offers art and music programs. And now, with the clearing of the alley and painting of the murals, it is fitting for this park to be bordered by a landscape that is not only attractive, but that the community can be proud to say is their own. The work (both laborious and artistic) has and is currently being completed primarily by local students, volunteers, and artists, after all. The goal is that residents will take pride in the alley and thus maintain it, and also set an example for the greater Osborn area in how to turn something neglected into something beautiful and loved. Success has already been met to a certain degree; even though murals are just starting to go up, residents have come out to clean up their parts of the alley and do other repairs to their property. 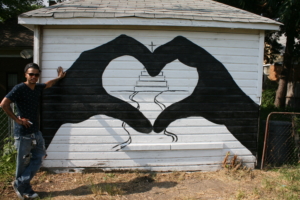 Aaron Love, a Detroit native who currently lives in Arizona, stands with his work-in-progress mural. Love said that he hopes to split his time between Arizona and Detroit, and is supportive of S.A.Y.’s mission of improving the lives of youth through multi-disciplined programming.

I’m grateful to everyone involved in this project for allowing me to engage with them and be a part of the story. As we finish up painting garages, pulling weeds, and taking pictures along the way, my hope is that I’m able to do the neighborhood justice in recording the events and the character of the space, and even contribute to the greater Detroit narrative in some small way. After all… “Detroit is big enough to matter in the world, and small enough for you to matter in it.”