My Kind of Place

I walked off historic Woodward Ave., meandered down the street, stepped around the corner and found a space filled with buses, homeless individuals and prostitution. Many of the buildings surrounding the space were vacant, covered in graffiti and in disrepair. I was told this is not a “good area”. Despite the many deterrents I found myself drawn to this space. The density of buildings, a liveliness of the people there, along with the open plaza space that was the epicenter of it all. I had found my favorite space in Detroit, Capitol Park. 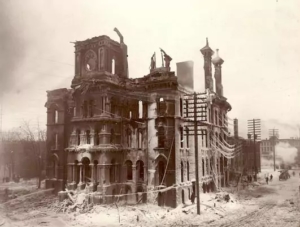 The original state capitol building later a high school lost to fire in 1893.

Capitol Park has had a long and storied past with many different renditions. It was the site of Michigan’s first state capitol, it once was home to a high school, and then transformed into a public space. When the downtown bus hub closed in Cadillac Square it was temporarily moved to Capitol Park which is about the time I found it in 2002.
In the last few years Capitol Park has seen a bustle of activity from the renovation of historic buildings, such as the nationally registered historic Farwell building. The redevelopment and restoration of the area has seen an influx of new residents, creating a much more active space that continues to draw more investment. Just recently the construction of 11-story and 8-story buildings was announced that will include residential and commercial retail space.

I have loved Capitol Park for a long time now. The new excitement surrounding the space which in return has also sparked the controversy regarding gentrification. (That is a topic and a conversation for another time.) is not my reasoning behind my love affair. I think it began because even in Detroit’s lowest of lows and emptiness it always made me feel like I was in a major city. The building density surrounding an open park or plaza brings to mind the public squares of Europe. A space like Piazza Navona in Rome where there exists a range of old buildings snugly placed next one another providing a public area for individuals to gather, rest, meet others, or simply take in their surroundings. 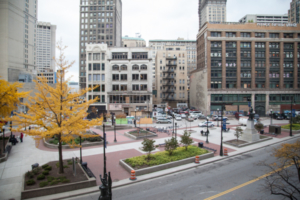 My infatuation with Capitol Park does not mean there are no other public spaces and parks I like in the city. The other spaces just don’t provide the same welcoming feeling I get in Capitol Park, it’s as though the surrounding buildings are reaching out to give me a hug. Campus Martius tends to be almost overwhelmingly busy and often to programmed, with less opportunity for impromptu gatherings and relaxing. Grand Circus Park provides you with ample green space to walk the dog or lay in the grass but Adams St. surrounding the park provides an openness to the space where the building faces aren’t as imposing or in your face. Maybe that lies in my background in architecture that I like to be in the built environment.

If you haven’t visited Capitol Park or the next time that you do take a moment, sit down in the middle of the park and just take in the space around you, it is unlike any other space in Detroit and I think you are going to like it, I know I always will.